British domination in the Elite BMX Racing European Championships with the titles in the older category awarded to Bethany Shriever and Kye Whyte who both secured solid wins in the finals. They both add another title to their already impressive and extensive collection.

Races were held in the Dessel facility (Belgium) over three days, which also hosted the Cruisers and Challenge events. The success of this continental competition was confirmed by the number of competitors taking part: 1,770 riders from 25 countries, demonstrating the great passion and love for BMX.

Silver medallist in the 2020 Tokyo Olympic Games, the Briton Kye Whyte, dominated a fiercely contested final in which he came ahead of the Swiss Cédric Butti and Eddie Moore (Great Britain).

In the Under 23 category, the titles were awarded to the French rider Hugo Marszalek who came in front of his compatriot Tatyan Lui Hin Tsan, the Dane Magnus Dyre, and Malene Kejlstrup (Denmark) beat the Swiss Thalya Burford and Nadine Aeberhard.

At the BMX European Championships, the Team Time Trial titles were also awarded, both (men and women) going to France.

The next edition of the BMX Racing European Championships will take place in Besançon (France) from 7 to 9 July 2023. 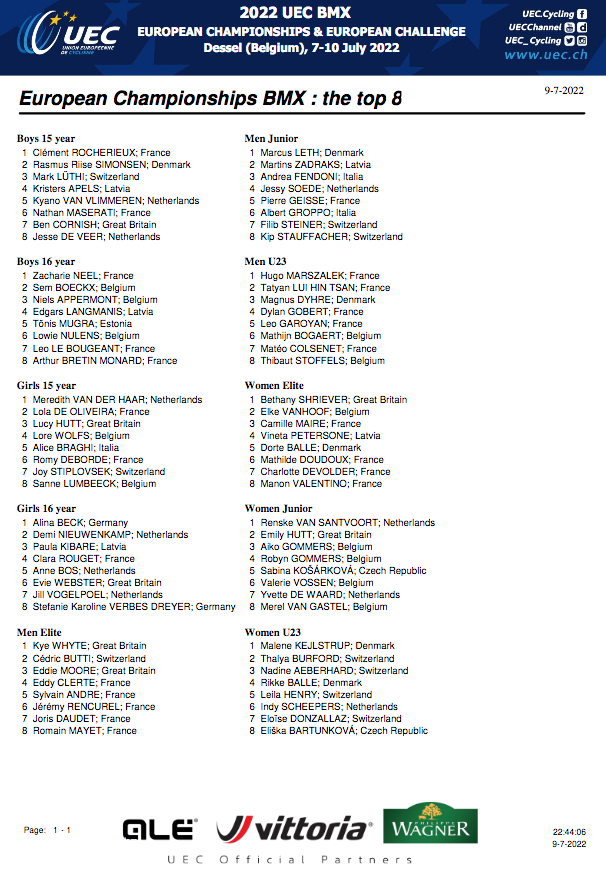