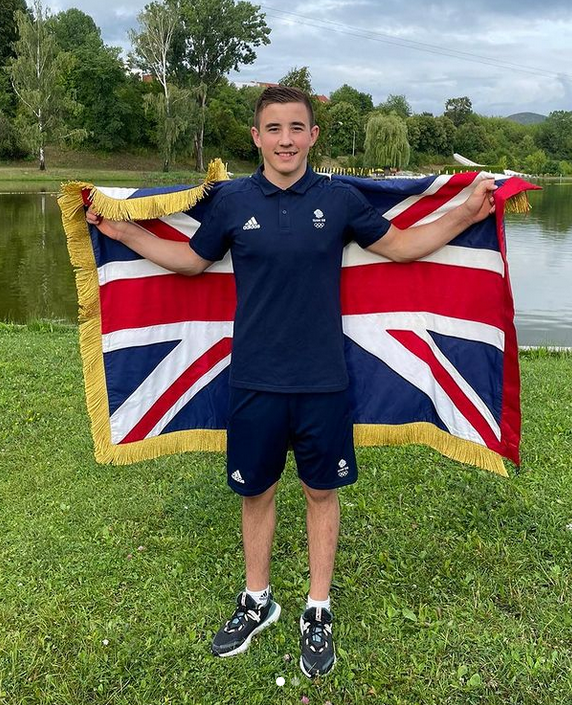 Team GB’s campaign at the Banská Bystrica European Youth Olympic Festival (EYOF) came to an end today, with another medal from gymnast Danny Crouch putting the total at 18 for the competition.

Sixteen-year-old Crouch won silver in the today’s horizontal bar final, bringing his medal total for Banská Bystrica 2022 up to three after claiming gold in floor and silver in the artistic gymnastics team final alongside teammates Oakley Banks and Reuben Ward earlier in the week.

After completing his final event, Crouch was selected in a vote by his teammates to carry the flag at tonight’s Closing Ceremony, marking the end of a successful campaign for Team GB across the six-day multi-sport event – and although adverse weather in Banská Bystrica has forced organisers to limit the number of attendees at the ceremony, Team GB are refusing to let it dampen their spirits.

Crouch said: “It’s an amazing feeling to be the flagbearer, especially as I wasn’t just selected by my sport but by my Team GB teammates. I feel really proud.

Lizzie Simmonds, Chef de Mission for Team GB at Banská Bystrica 2022, said: “I’ve been really proud of the whole team this week in Slovakia. It’s been a tough few years for young athletes, so it’s been great to watch some outstanding competition in all five of our sports.

“Danny has had an exceptional festival, and has led the way with his performances and his attitude towards the event. To be voted as flag bearer by his fellow athletes is a true testament to the impact he has had on the wider team, and I know they are honoured to have him leading Team GB out this evening.”

“I hope he enjoys the occasion as we round off a very special week here in Banská.”

Judo and gymnastics were the only sports with Team GB in action on the final day of the competition. Fourteen-year-old Abi Martin put on a strong performance in the girls’ floor final to claim fourth place with a score of 12.900, only narrowly beaten to a spot on the podium by Romania’s Puflea with 13.200, and Germany’s Kevric and Italy’s Marano who tied with 13.066.

Judokas William Andrews, 16, Luke Austen, 18, Holly Devall, 17, Daniel Givan, 18, Anya Hassan, 17, and Charlotte Jenman, 17, took on the mixed team event on the mat this morning. In their first-round battles against Hungary, Austen and Hassan both came away with the win, but losses for Andrews, Devall, Givan and Jenman meant Team GB weren’t able to secure a spot in the second round.