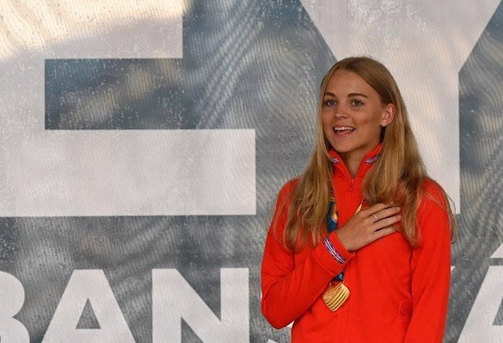 Cyclist Cat Ferguson (pictured above), aged 16, picked up Team GB’s first medal of the campaign when she eclipsed the field to claim gold in the girls’ time trial with a time of 12:11.58. Sixteen-year-old year old Seb Grindley later scooped bronze in the boys’ time trial against a competitive field, securing his spot on the podium with a time of 10:59.95.

Ferguson said, “I don’t believe it yet, it doesn’t feel like it’s actually happened. It feels amazing. The weather was quite good today for us Brits – it was rainy and wasn’t too hot, so suitable conditions for us, but I didn’t think I would get a bronze, never mind a gold. To win the first medal for Team GB at this event is amazing, so a big thank you to Team GB for bringing me out here.”

Grindley said, “I’m feeling great – it’s a really good feeling to win a medal with all my friends and family here. I’ve exceeded my expectations today and I’m really proud of what I’ve achieved. I’m also really excited for the road race on Thursday. I think I’m more suited to it than the time trial, so we’ll have to see how it goes!”

Sixteen-year-old Oscar Bilbao claimed Team GB’s second gold when he held out to win the boys 200m breaststroke final in a time of 02:18.82. Teammate Skye Carter, aged 14, claimed bronze in the girls 100m freestyle in another personal best of 56.33 after sailing through the group stages and semi-finals on day one.

Crouch said, ”This is a really proud moment for myself and for the team. I’m really happy with how our performance was – we’re all really happy!”

Ward added, “We started off on pommel and we all went through a clean routine and did well there. Then we moved onto rings – there were a couple of small mistakes but we managed to move on from that, and gradually throughout the competition we got better and we got more comfortable.”

Banks finished, “It’s been amazing coming out to Slovakia, knowing what we had to do and seeing if we could to get a medal, so to win silver is just amazing. This experience has been new for everyone and I think we’re going to keep getting better and better over the years.”

Shaw said: “It’s pretty crazy to have won the first judo medal for Team GB at this EYOF! Obviously for the whole team I think it’s good that we came out on the first day and got a medal – I think it sets the tone for the rest of the week.  I’m completely over the moon with it. I came in thinking I could get a medal but I just had to believe in it on the day. It’s just made me so happy!”