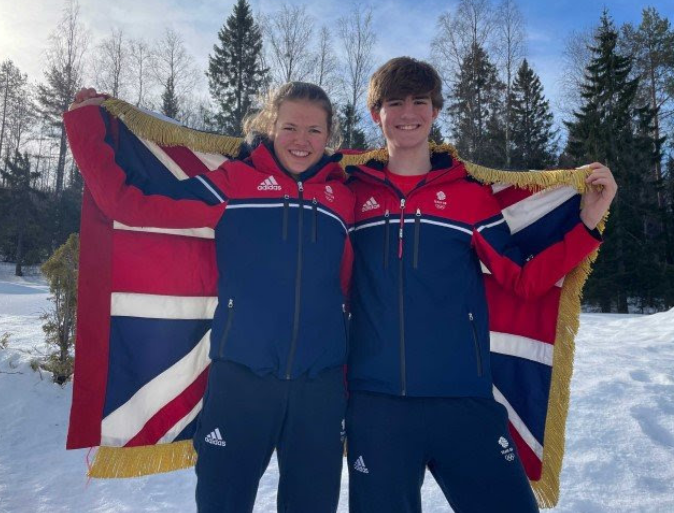 Anna Berger and Edward Appleby will have the honour of leading Team GB at the Vuokatti 2022 European Youth Olympic Festival (EYOF) Opening Ceremony, after being announced as Flagbearers this morning.

Berger (biathlon) and Appleby (figure skating) were both nominated by their sports and then selected by Elaine Skilton, Team GB’s Chef de Mission for Vuokatti 2022, for best displaying the One Team GB values throughout their junior careers.

Sunday’s Opening Ceremony at the Vuokatti Arena will be the first Youth Olympic event where there will be both one male and one female Flagbearer, with the British pair following in the footsteps of Eve Muirhead and Dave Ryding, who, last month, had the same honour at the Beijing 2022 Olympic Winter Games.

The Games will run between March 20-25 and Team GB will be represented by 10 athletes across six of the nine disciplines. Over 1,000 athletes from 44 European countries will compete at the EYOF, in what is Europe’s largest multi-sport winter event.

Berger, who starts her competition in the biathlon 6km sprint on Tuesday, said: “I wasn’t expecting it at all, but I was really, really happy when I heard the news. It’s a real honour to have been asked to be Flagbearer and I’m really looking forward to the experience.

“I’m just really proud. I’ve come so far, not only being selected as part of Team GB for this huge event, but to now have been asked to be the Flagbearer is just amazing.

“My first biathlon competition is on Tuesday, so I’m really looking forward to that. I’m really going to give it my best, have fun and soak up the experience.”

Two-time British Junior champion Appleby, who’ll compete in both the men’s figure skating short and free programs, said. “I am so excited, albeit slightly surprised as I didn’t know that I had been nominated, so it came as a complete shock. But I’m completely honoured to have been chosen for it. I was in the car with my mum at the time we both got a bit giddy.

“It’s surreal really to be put in the same position as some of the great athletes, like Andy Murray and Lizzy Yarnold. It’s a bit of an eye-opener to realise that as long as I keep working hard for it, I have a good chance of being able to follow them.”

Elaine Skilton, Team GB’s Chef de Mission for Vuokatti 2022 said: “Anna and Ed should be extremely proud to lead the delegation out at tonight’s Opening Ceremony – their enthusiasm and commitment to being part of Team GB really shone through when making this selection and I know they will both represent the team well. I hope that they enjoy the experience, it is a special opportunity as an athlete to lead your country out at an Olympic event.

“The team arrived in Finland yesterday and have settled into the Athletes’ Village well. They are looking forward to tonight’s Ceremony and we all look forward to the sport starting tomorrow, in what we hope will be another great Youth Olympic Festival for Team GB.”