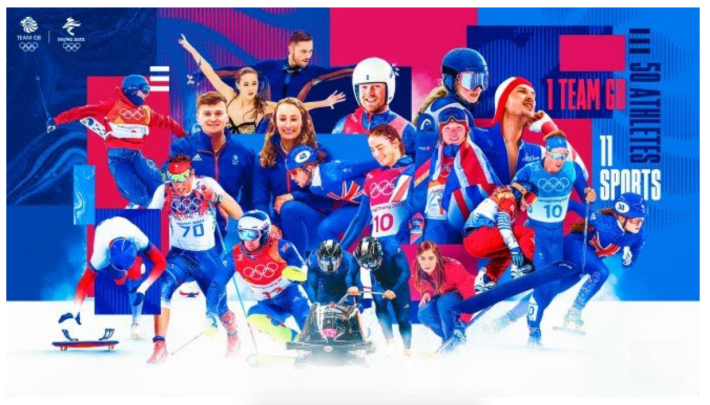 In a late flurry of announcements last week, bobsleigh, skeleton and ski and snowboard athletes were confirmed bringing the team total to 49, 21 of whom are returning Olympians, from 11 disciplines.

The 50th and final British athlete confirmed for Beijing 2022 is speed skater, Ellia Smeding, who was confirmed shortly before the whole team announcement was made and will compete in the 1000m and 1500m in Beijing.

Speaking after being confirmed as Team GB’s final athlete, Smeding, said: “Being part of Team GB in Beijing is an absolute dream come true. This season has gone really well so far, and I’m hoping to put my best races down at the Games. I’m so excited to share this experience with Cornelius, and to have two long track speed skaters at the Olympic Winter Games will hopefully inspire a future generation of skaters.”

The athletes will be departing the UK over the next 10 days before competition starts on 2 February with the mixed curling and the Opening Ceremony on the evening 4 February. Updates from every Team GB sport and athlete can be followed throughout the Games via the Team GB app as well as on TeamGB.com and across social media channels.

The first athletes to be confirmed for the team were the men’s curling team of Grant Hardie, Bobby Lammie, Hammy McMillan, Bruce Mouat (skip) and Ross Whyte (alternate) back in October, with the mixed curling duo of Jennifer Dodds and Mouat also being announced.

Familiar faces made up the short track speed skating team announcement as Pyeongchang Olympians Kat Thompson and Farrell Treacy were selected for their second Games with Treacy’s younger brother Niall being selected for his first Games. The Treacy brothers are one of three sets of siblings at the Games, along with the Atkins and the Gerken-Schofields.

The women’s curling team completed the team announcements for 2021 as four-time Olympian Muirhead’s rink was confirmed with four Olympic debutants of Jennifer Dodds, Hailey Duff (alternate), Milli Smith and Vicky Wright joining the Sochi bronze medallist. They will hope to emulate Rhona Martin’s rink who brought home gold 20 years ago in Salt Lake City with the famous ‘Stone of Destiny’.

Team GB began the Winter Olympic year by selecting a long track speed skater for the first time in 30 years as Cornelius Kersten was chosen to compete in China at the National Speed Skating Oval.

Soon after Rupert Staudinger kicked off a run of sliding sport selections as the 24-year-old returned for his second Games having finished 33rd in Pyeongchang.

Laura Deas headed up a four-person group of skeleton athletes to be selected for Beijing. Deas will be hoping to build on her brilliant bronze in Pyeongchang and continue the incredible British skeleton legacy. She is joined by the next generation of sliding talent with Brogan Crowley, Matt Weston and Marcus Wyatt all hoping to show what they can do in Beijing.

With competition running right up to the wire, Team GB’s bobsleigh crews were confirmed soon after with Brad Hall and Mica McNeill being confirmed as pilots of their respective crews and in so doing became double Olympians. Hall will pilot both a 2-man and 4-man bob with Greg Cackett, Nick Gleeson and Taylor Lawrence teaming up in the 4-man and Gleeson joining Hall in the 2-man. Double Olympian, Ben Simons, will be in Beijing as travelling reserve.

In the women’s bobsleigh, Mica McNeill will hope to build on Team GB’s best ever result of eighth in the women’s discipline four years ago. She was joined by dual summer and winter Olympian, Montell Douglas, who competed at the Beijing 2008 Olympic Games in athletics and will become the first British female to compete in both a summer and winter Games. Adele Nicoll will act as the travelling reserve athlete for the women’s crew.

As is always historically the way, ski and snowboard were the last team to be confirmed prior to the whole team announcement with 18 skiers and three snowboarders being selected. Nine athletes were selected for the first time, while 12 squad members made a return.

A strong freestyle skiing contingent saw Lloyd Wallace selected in the aerials, the Gerken-Schofield sisters in the women’s moguls for the first time and Will Feneley in the men’s. Another debutant Ollie Davies will look to make his mark in the ski cross event while three-time Olympian and medallist (for Team USA) Gus Kenworthy will be in action in the men’s halfpipe.

Zoe Atkin will represent Team GB in the women’s halfpipe while older sister and Pyeongchang bronze medallist Izzy will be in action in the slopestyle and big air along with Kirsty Muir, Team GB’s youngest athlete at 17 years and nine months, as well as Katie Summerhayes. In the men’s event double Olympian, James Woods, will hope to improve on his fourth place in Pyeongchang.

Finally, a strong cross-country skiing contingent will take to the National Cross-Country Centre with two four-time Olympians in Andrew Musgrave and Andrew Young and Olympic debutant James Clugnet making up the trio.

Speaking ahead of the whole team announcement, Team GB Chef de Mission, Georgina Harland, said: “We are delighted to welcome the 50 athletes who will make up the team at Beijing 2022 and feel these athletes have the opportunity to not only challenge established winter nations but compete with the success we enjoyed at both Sochi and Pyeongchang.

“This is an exciting new chapter for British winter sport with a number of new names for the British public to enjoy and get behind and with athletes who have experienced four Olympic Winter Games, they will undoubtedly be a great support to the emerging talent.

“It promises to be a fantastic Olympics and Team GB will go into the Beijing Games as one of the best prepared teams and one that will be competitive across more disciplines than ever before.”

“It promises to be a fantastic Olympics and Team GB will go into the Beijing Games as one of the best prepared teams and one that will be competitive across more disciplines than ever before.”

As with the last Olympic Winter Games coverage from Beijing will be across both the BBC and Eurosport. BBC Sport will broadcast more than 300 hours of live coverage across BBC One and BBC Two, with even more on BBC iPlayer, Red Button and the BBC Sport Website.

Team GB fans in the UK can also watch all the action from Beijing via discovery+, Eurosport 1 and 2, three dedicated pop-up channels, and the Eurosport App. Discovery will have over 1,000 hours of live-coverage and more than 100 winter sports stars and presenters, as well as immersive technology exclusive to Discovery+ and Eurosport, including the Cube studio.