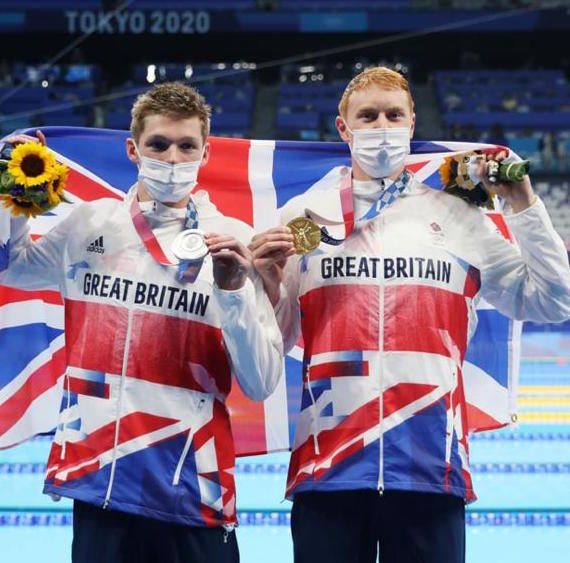 Dean beat his fellow Brit on the touch to become a surprise but far from undeserving Olympic champion, while Scott was left with the familiar feeling of taking home silver.

Not since 1912 had more than one British swimmer departed an Olympic Games laden with gold and not since 1908 had Team GB secured a swimming one-two but both droughts were broken in spectacular style as the duo surged from behind with 50 metres to go.

It was 21-year-old Dean – whose 200m freestyle bronze at the European Championships in May was his only prior individual long-course major medal – who narrowly pipped his compatriot, by just 0.04 seconds to be precise, at the wall.

“It’s amazing, a dream come true to wear an Olympic gold medal around my neck and to go one-two with another Brit on the podium,” said Dean, from Maidenhead.

“I contracted COVID-19 twice in the last 12 months, I had six or seven weeks out during an Olympic year which is almost unheard of.

“When I was sitting in my flat in isolation, an Olympic gold seemed a million miles off.

“But my coach [Dave McNulty] brought me round and it’s all come together.

“I had COVID-19 in September and the New Year. The first time wasn’t too bad. The second time I did the full isolation period, I wasn’t able to train and it was a slow-build back into training.”

He added: “It’s a real honour. I watched the flag go up and the anthems be played, it is the stuff of dreams. I’ve been thinking about this since I started swimming at eight years old. Today’s the day, it feels amazing.

“I was on holiday during the Beijing Olympics, I watched Michael Phelps. I’d just started swimming and moved to my local club in Maidenhead, started training with my coach, Paul Lloyd, and I was watching Michael Phelps clean up.

That was no more than the Scot deserved and his bid for gold isn’t done just yet, set to team up with Dean, among others, in the 4x200m freestyle relay.

There’s more history to be made and the gold rush in the pool may not be done just yet.

“I’m buzzing for Deano. He’s had a really strange 18 months, catching COVID-19 twice, he got a monster PB in trials but to see him move it on again and win gold is phenomenal,” said Glasgow swimmer Scott, 24.

“The best possible outcome is to go one-town, we’ve delivered on that, there was a PB as well in the final so I can’t complain at all.

“Coming out, there are plenty of things which I could have done better which I’ll take a look at and go over but I’m really happy with that.

“We’re in an apartment together in Tokyo. I’ve been on several teams with Deano now and we get on really well, whether that’s playing cards or watching films together or whatever.

“This is the biggest medal of my individual career. I’ve won Commonwealth and European but I wouldn’t say that’s matched by an Olympic medal, the pinnacle of our sport.”