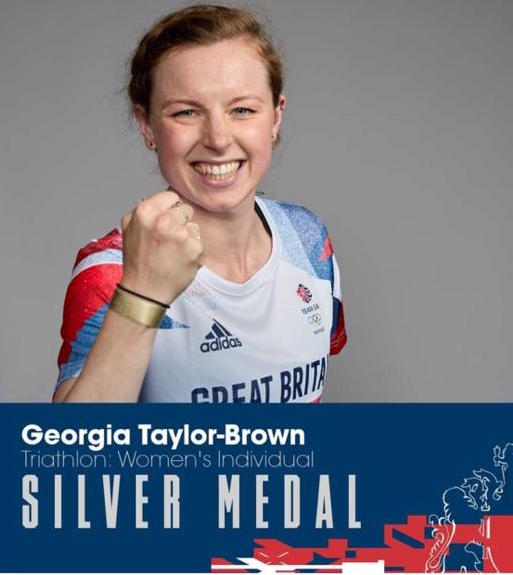 The Mancunian lost 22 seconds after a mechanical failure on the final lap, leaving her fifth.

But she bridged the gap to bronze in little more than a kilometre and caught USA’s Katie Zaferes with a lap to go to claim a remarkable medal on Olympic debut – just weeks after being injured in the build-up to the Games.

It is Team GB’s eighth medal so far at the Tokyo 2020 Olympic Games and fourth silver.

“It’s strange to come to an Olympic Games not having raced since last September. I kept it all a bit private, what was going on,” said Taylor-Brown, 27.

“I got a stress response in my femur 12 weeks ago. My training had gone so well before then though, so that was a bit of a shock, but I knew I had all of that training in the bag.

“I wanted to keep it private, you don’t want to show your competitors your weaknesses, so I did just say I was ill. I’ve had six weeks of building my running back again.

“It’s not perfect, it’s not what I wanted or what anyone would want. I got myself into a really good position and I was as fit as I could have been on the start line today.

“About a week before we flew out I had to prove I was fit to compete, which was probably more stressful than today because it could have been taken away from me.

“But I proved I was fit, ready to go and did more than they asked me to do. I had to go in to today relaxed and that I’d done everything I possibly could, and I left everything out there.”

Typhoon Nepartak struck Tokyo in the early hours of the morning and brought heavy rain and high winds, with slippery course conditions wreaking havoc on the 40km bike ride.

Four athletes came off and failed to complete the first 5km lap, with Taylor-Brown working harder than the rest at the front of the leading group.

It was intact until the penultimate lap when Vittoria Lopes dropped off and then disaster struck for Taylor-Brown late in the last circuit, when a flat back tyre saw her bleed time on the slow, technical turns.

Taylor-Brown, from a cross-country background with a father who was an international over 800m, let rip on the run and soon overtook Learmonth and Germany’s Laura Lindemann.

It took her longer to reel in Zaferes, but she caught her on the blue carpet into the bell lap and an 8:58 10km run saw her take silver.

Bermuda’s Flora Duffy went clear to win gold by a margin of 1:14.

“I planned for hot weather and for a slower race, which favoured me because of the lack of running I’d done recently,” added Taylor-Brown.

“I didn’t have the speed that Flora had today, and I’m more than happy with silver. Without the injury I think I could have hung in there and maybe given her a bit more of a race. I think I’ve handled it very well and I’m proud to have got on the start line.

“We’ve got Vicky here who’s a medallist from Rio and now a three-time Olympian. She’s given us so much knowledge coming into this and tips and tricks.