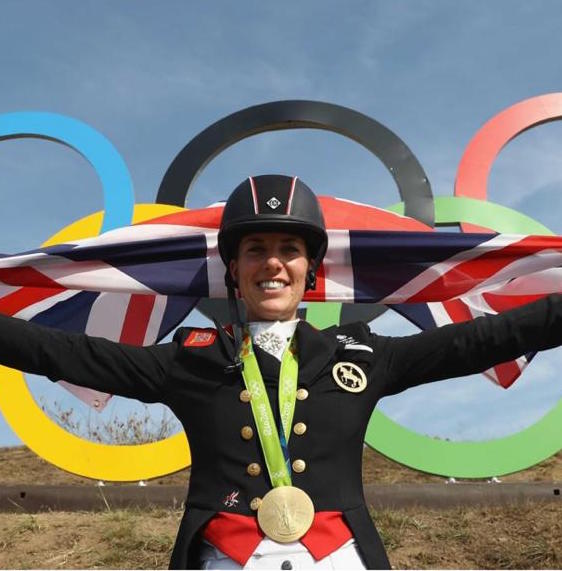 Charlotte Dujardin became Britain’s most decorated female Olympian of all time with her fifth medal in Tokyo.

Dujardin helped Team GB claim a team equestrian dressage medal for the third straight Olympics – adding a bronze to their gold and silver from London and Rio.

That sees the 36-year-old join rower Dame Katherine Grainger and tennis player Kathleen McKane Godfree on five medals, with Dujardin having the most gold medals of the three.

Defending champions Germany proved just too strong again and the USA scored marginally better to drop Dujardin, Carl Hester and Charlotte Fry down to third – the same podium as 2016 with just the one switch of places.

Dujardin after her record-breaking bronze for her and Gio said: “It’s always a huge honour just to come to an Olympic Games and represent your country.

“To come away with another medal is just absolutely unbelievable. I feel so proud to be here, we have such a fantastic team – it’s unbelievable.

“To come away with another medal and be alongside incredible inspiring women and sportspeople, I can’t say much more.”

Dressage may remain one of the most puzzling spectacles at the Olympics, a combination of horsemanship, grace, training and athleticism but Great Britain have quickly established themselves as one of the powerhouses of the discipline.

And you don’t have to understand these majestic dancing horses to appreciate these stats.

Team GB didn’t medal at the first 22 Games in which dressage was staged – in the last three they’ve won three golds, one silver and two bronze – Dujardin contributing in all but one.

Alongside Dujardin, this medal was won by Team GB’s oldest representative at these Games in 54-year-old Hester – who first competed at Barcelona 1992 – and Fry, a first-time Olympian at Tokyo 2020.

“Any medal is a dream come true for any athlete,” said Hester, who competed with En Vogue.

“We’ve had gold in London and this was a hard-fought battle, we’ve got a young Lottie [Charlotte Fry], we all had young horses – it is a dream come true that they all came together and performed here.

“I wasn’t entirely sure how it was going to end up because we haven’t been able to compete.

“We have been comparing against each other about how they’re going to perform, so the fact that they did and the judges loved them, it’s a great feeling.”

Fry said of her performance with Everdale: “I’m pretty speechless but very, very proud. I think it’s pretty surreal that I’m stood here in between the dressage king and queen.”