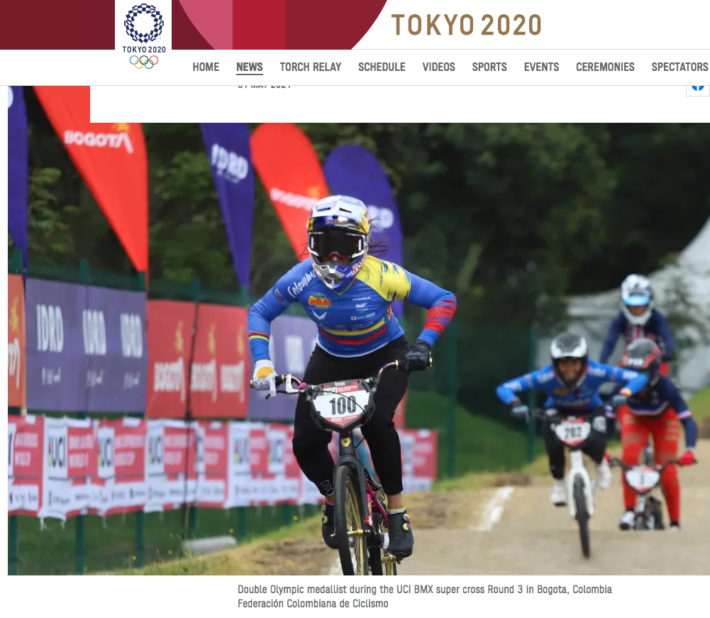 The Queen of BMX does it again.

After Saturday’s victory, Mariana Pajon delivered again in the final round of the UCI World Cup BMX Supercross on Sunday (30 May) – cruising right to the top podium to bring the competition to a spectacular close on her home soil in Bogota, Colombia.

The double Olympic gold medallist was in a league of her own edging out all her opponents right from the beginning, before crossing the finish line at 36.244 seconds, followed by USA’s Payton Ridenour (37.400) in her first ever World Cup podium, and Russia’s Natalia Afremova at third place (37.744).

Speaking to Olympic Channel after the race, Pajon said: “I am absolutely happy, I knew that i just had to do it here. I don’t just want to win, but to win consistently, have a good gait and an awesome lap. [And] even if it was raining, I just want to beat my time from yesterday, and that’s what I did and I am extremely happy.”

Pajon, who has only returned to racing this year after recuperating from injuries, said competing in her native Colombia was a double blessing.

“I really wanted to return because I got injured a year before then pandemic hit. I really wanted to be racing that’s all I want – to be here, to feel that adrenaline and I am happy to have this race and having this race in Colombia is more special.”

Pajon’s dual victories over the weekend adds to her World Cup collection – 12 wins in total. More importantly, it offered her ranking points which will bring her closer to qualifying for the Olympic Games Tokyo 2020 in 2021, where she will have a chance to defend her Olympic title and add a third gold to her collection.

Pajon will find out if she qualifies for the Olympics tomorrow (1 June).

Meanwhile, the USA’s Ridenour, who turned 19-years-of-age on Saturday, received a great birthday gift as she celebrated her first podium result.

“I turned 19 yesterday. I couldn’t have asked for a better weekend,” the US athlete said. Ridenour will also need to wait for her Olympic fate and await whether Team USA names her in their squad for Tokyo 2020.

Like Pajon, the Frenchman dominated, leading the pack right off the starting blocks, crossing the finish line at 32.663 seconds – the only male rider to clock in at sub 33 all weekend.

Meanwhile, home favourite and Rio 2016 bronze medallist Carlos Alberto Ramirez Yepes tried with all his might to keep up with Daudet, managing a close second with 33.358, whilst Daudet’s French compatriot Arthur Pilar finished third in 33.585 to complete the Men’s elite podium.

Speaking to Olympic Channel after the race, Daudet said: “It’s amazing to be back, and obviously to be back at the top of the box this weekend, it’s a good feeling.”

However the 30-year-old world champion said racing in Bogota was not as easy as it looked.

All eyes are now on Pajon and Daudet on how they will stand as the upcoming Olympic Games edges closer than ever.