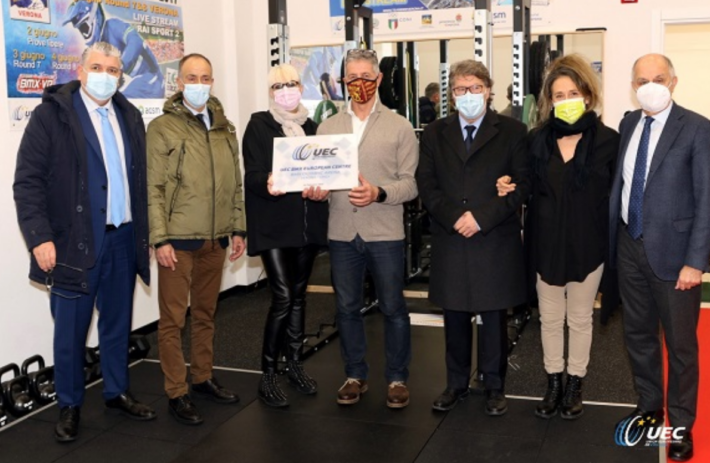 Approved last year by the UEC but postponed to this season because of the pandemic which marked 2020, this important initiative is recognition by the Union Européenne de Cyclisme of undoubtedly one of the most active centres in Europe both in terms of competitions and organisation of events. Yesterday at the Centre, in the presence of the Mayor of Verona, Federico Sboarina, the UEC President, Rocco Cattaneo, the President of the Italian Cycling Federation, Renato Di Rocco, and the UEC General Secretary, Enrico Della Casa, along with other sporting and government authorities, a modern and well-equipped sports hall was also opened.

Thanks to the Team BMX Verona organisers and its President, Linda Spiazzi, managed by Paolo Fantoni and supported by the Italian Cycling Federation as well as local authorities, over the last few years the Italian Centre has hosted high level events such as the European Championships and BMX European Cup test events.  There is also an event scheduled this season on the weekend of 1st to 2nd May.

With its official recognition as a UEC BMX European Centre, over the next few months the Italian facility will organise a series of initiatives with, in addition to a series of races, training programmes for athletes and training courses for technicians and commissaires. These initiatives are part of the Union Européenne de Cyclisme’s development programme activities.

Verona will not be the only UEC BMX European Centre since the one in Valmiera (Latvia) will be officially opened in the next few weeks and will also be a leading centre in the one of the most active geographical areas in BMX, especially for young people.