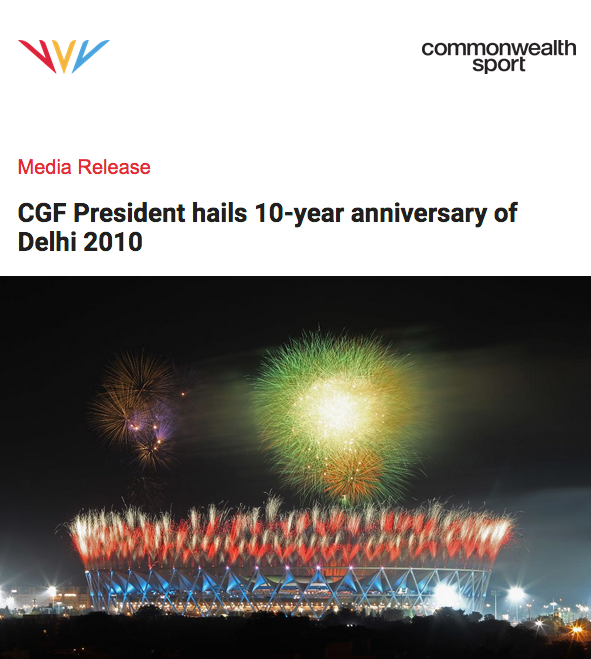 The Delhi 2010 Commonwealth Games, the biggest multi-sport event to be staged in India, ran from 3-14 October 2010 and saw over 4,000 athletes compete across 21 disciplines. Across 11 spectacular days of sport, India achieved its best performance ever at the Commonwealth Games, finishing second overall by winning 101 total medals, including 48 golds.

Delhi 2010, which marked the first time India had hosted the Commonwealth Games, saw five new sporting venues constructed while there were significant venue upgrades to the Jawaharlal Nehru Stadium, host of the ceremonies and athletics events, as well as the Indira Gandhi Stadium that staged track cycling, wrestling and gymnastics.

There are now world-class training facilities full of athletes of all ages, while four venues, including the Jawaharlal Nehru Stadium and Indira Gandhi Stadium, now provide free access for Delhi residents to participate in sport. Sporting participation, particularly among young people, has increased since the Games, as has investment in sport science to support high-performance athletes.

In addition to the sporting infrastructure and facilities, transport across Delhi has improved significantly, through work undertaken due to the Games. There have been significant upgrades to the Indira Gandhi International Airport, while road-widening projects, new flyovers and modern bridges all put in place for Delhi 2010 have dramatically improved links for the thriving capital city.

Dame Louise Martin said: “At the invitation of Commonwealth Games India (CGI) President Dr Narinder Dhruv Batra, I was delighted to travel to Delhi last year to witness first-hand the amazing legacy of the 2010 Commonwealth Games.

Although the lead up to the Games experienced some well-publicised challenges, this does not undermine the incredible sporting achievements of Commonwealth athletes at the first ever Games in India.  Indeed, I passionately believe that the true legacy of Delhi 2010 is a hugely positive story that deserves to be told.

While in Delhi last year, I was fortunate to travel to a number of venues, including the Indira Gandhi Stadium, where I saw athletes of all ages training under the guidance of some of the best coaches in India. It was truly inspiring to see these venues full and thriving, with children as young as six years-old training alongside their inspirational role models like six-time world champion boxer Mary Kom.

The initiative to make elite sporting infrastructure accessible to all people across the country, free of charge, was spearheaded by India’s Minister of State for Youth Affairs & Sports Kiren Rijiju who deserves huge credit for his continued commitment to building on the legacy of the Games.

Although the pandemic means that I cannot be in Delhi at this time to celebrate the 10-year anniversary of the 2010 Commonwealth Games, I know that the Commonwealth Sport Movement will continue to play an important role across India.

My message to everyone in Delhi and across India is first and foremost hope and solidarity in our collective ability to safely navigate through and beyond this global pandemic. On this special date, however, I hope you are also able to reflect back on what was a spectacular 11 days of sport for the athletes and spectators of Commonwealth and look forward with hope to a brighter future that the Commonwealth Games inspires us to dream of.”

We are proud to be remembering this special 10-year anniversary milestone today and look forward to future opportunities to staging and celebrating Commonwealth Sport in India.”

Due to the pandemic, the CGI and the CGF have agreed to postpone the official 10 Year Celebration function in Delhi to a later date.