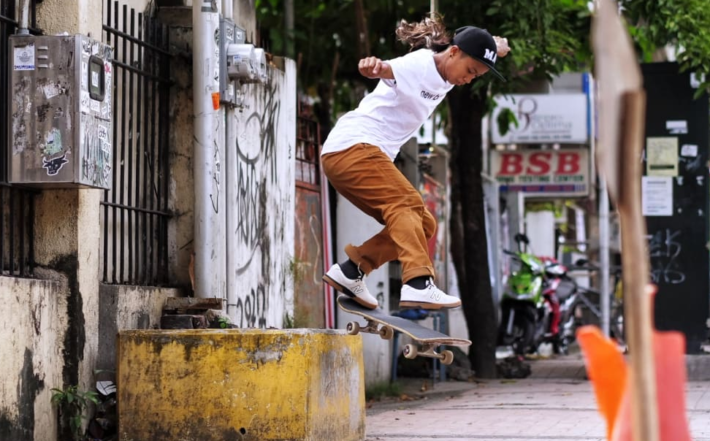 Margielyn Didal from the Philippines hopes to compete in next year’s Tokyo 2020 Games. Courtesy of Anthony Claravall

The Filipina skateboarder is riding high, with new ambitions to bring Olympic pride to her country and elevate the status of her sport at home

Pro street skateboarder Margielyn Didal is living a fairytale – the kind that can take you from the streets and land you in the Olympics.

The 21-year-old burst onto the international skateboarding scene with a 2018 gold at the Asian Games followed by two gold medals in the Southeast Asian Games in 2019, and is the first Filipino to grace global skateboarding events such as Street League Skateboarding in London and X Games Minneapolis. Earlier this year, she claimed a bronze medal in the first ever Women’s 2020 Tampa Pro Competition.

Now ranked the 14th best women’s street skateboarder in the world, Didal is poised to represent the Philippines at next year’s Tokyo 2020 Games, where skateboarding will be making its Olympic debut.

“I still can’t imagine representing my country and raising the Philippine flag, especially at the Olympics,” Didal told Tokyo 2020.

“Most people, when they see a skateboarder, they say ‘you don’t have a future there. They are just hanging on the street’. We look dirty because we are trying to land a trick and we get dusty. And now we’re expecting to be in the Olympics.”

So far, only four athletes from the Philippines have qualified for the Olympics, but Didal is already on the brink of qualification, especially if she maintains her position in the world’s Top 20.

“I mean, we’re talking [about the] Olympics actually. It’s a big pressure because you know it’s for your country.”

Skateboarding for the family

Didal started skating when she was 12-years-old and fell in love with the sport instantly.

“It felt normal [like I was] floating and that was super cool. And on the same day, someone tried to teach me how to do some tricks and I learned it the same day.”

And it gave her the feeling of freedom.

“[Skateboarding] is the best way to escape problems for me,” Didal said.

“Sometimes, if you [are] overthinking on a skateboard you can’t think of other stuff, you only need to think of the skateboard yourself and the trick.”

Didal honed her skills by skateboarding on the streets and in shopping malls, where she would often be chased by police and security guards. She describes it as all ‘part of the thrill.’

At first, Didal was skateboarding for fun, but she soon realised she could start earning money to help her family.

“I didn’t have my own skateboard so I had to borrow one, but then they invited me to go to skate events – just small contests – and I got some prizes and a bit of cash. I was thinking I could buy rice.”

The daughter of a carpenter and a street vendor, Didal’s main motivation is to lift her family out of poverty.

“Skateboarding is fun [but] for me I just want to help my parents. We’re a big family. We are five siblings, and are now getting bigger.”

With her earnings from competitions and with sponsors queuing up to represent her, Didal is the family’s breadwinner.

She has also become an entrepreneur of sorts and has forayed into designing Philippine-themed shoes, tracksuits and even skateboards.

Her influence is also growing beyond the confines of skateboarding.

In 2018, Didal was featured on TIME Magazine’s list of the most influential teens – the sole Filipino to appear on the elite list – and was named on Forbes Asia Magazine’s 30 under 30 list the following year.

“It’s so cool being there and amazing, and also being a skateboarder from the street. I actually made a video about it on TikTok – ‘From street vendor to selling newspapers to Forbes magazine’.”

Didal is also one of ten athletes on the Olympic solidarity scholar programme – a scholarship set up by the International Olympic Committee to give talented athletes from less advantaged countries an equal chance of reaching the Games and succeeding in the Olympic arena.

While there is a training allowance involved, part of the funds for the scholarship may help create the first ever skatepark in the Philippines.

If this happens, it will help Didal, who is a strong advocate for building skateparks in her country, to access world-class facilities right on her home soil without the need to train elsewhere.

Riding high for the Games

If she qualifies next year, Didal will be performing on the greatest sporting platform of them all: the Olympic Games.

While lockdown in Cebu means she can’t train as much as she would want to, Didal has a game plan for the road to Tokyo 2020.

“First move when I get to skate, is to take it slow. It’s like my first time ever that I didn’t skate straight everyday for 8-12 hours.”

“I need to do basic stuff, and try to get used to the board again [and see] how it feels, and from there get to try what trick to do for the Olympics but also for the qualifiers.”

In the meantime, she has a makeshift space on her rooftop where she can train.

“I asked my dad to build the quarter pipe, if you guys have seen my videos, it’s a four feet tall quarter pipe, so I can just skate back and forth in the small space.”

One of her sponsors is also constructing a skatepark around 20 minutes from her house and once it has been built and quarantine rules are relaxed, she will be able to train and practise.

But if Didal does make it to the Olympics and wins, she said it would be hard to find the words to express her feelings.

“I can’t really tell right now. I am that kind of person – the same as in the Asian Games – it didn’t link up right away after winning the contest.”

“It’s also just like skating. Doing a trick on a skateboard takes time. You can’t really land it first time on the same day. It takes a step-by-step process when you land and you can’t really express how it feels.

“It takes sweat and blood to land the trick. I can’t really tell what my expression should be if I win that medal for the Olympics. I don’t know yet.

“But most Filipinos, they expect probably that we’re going to get the first gold medal from skateboarding. That’s kind of a bit of pressure for me, but I’m just staying positive. Good times and just enjoy it.”

Ultimately, what she wants more than medals, is to earn respect.

“Skateboarding is not for fame. [It’s] about the vibe of doing the same passion.”

“We just want respect, not just in skateboarding, but whatever status in life, even the kids in the street or street vendors.”