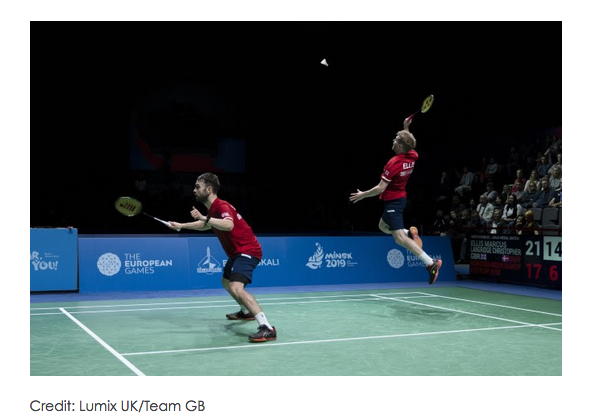 Team GB won their second and third gold medals of the European Games on day nine thanks to Pat McCormack in the -69kg and Marcus Ellis and Christopher Langridge in the men’s badminton doubles.

An action packed day of badminton was crowned with men’s doubles gold in the final match. Chris Langridge and Marcus Ellis won Team GB’s third gold medal of the Minsk 2019 European Games, following a 21-17, 21-10 straight sets victory over Anders Skaarup Rasmussen and Kim Astrup of Denmark. Despite facing the number one seeds, the Olympic bronze medallists from Rio 2016 were comfortable throughout.

“We’re really, really pleased, we’ve had a great tournament,” said Langridge. “Today I think we performed really well – in the end, it was quite comfortable against two of the best players in the world. The level we can perform at can be very high – we are the second seeds playing against the top seeds and we’ve ended up frustrating and defeating them.”

“It’s something the whole team can be proud of, not just our gold, but the amount of medals that we’ve won over the course of the Games,” added Ellis. “We didn’t think too much about who the opponents were, just to go out there and do our best – we’ve ended up with the gold which we’re thrilled about.”

Lauren Smith and Chloe Birch secured silver in the women’s doubles, following a three-set defeat to Dutch pair Cheryl Seinen and Selena Piek. The British duo had raced into a one set lead (21-14), but the Dutch number three seeds fought back, eventually completing the turnaround to take the gold medal.

Talking after the tie, Smith said, “It’s been a really good week for us – we’re really proud to get a medal on the board for Team GB. We would have liked it to be gold, but overall this week, to be unseeded and standing here with a silver medal, we should be really proud.”

Elsewhere, Team GB are guaranteed both gold and silver medals in the mixed double’s badminton, after Chris and Gabby Adcock and Marcus Ellis and Lauren Smith secured their respective pathways through to the final. Ellis and Smith defeated the French pair of Thom Gicquel and Delphine Delrue in straight sets, to set up an all-British affair with the Adcock’s, who also won in straight sets against Samuel and Chloe Magee of Ireland.

Kirsty Gilmour will also contest a gold medal match, this time in the women’s singles, after she beat reigning European Games champion and number one seed, Line Kjærsfeldt, in three sets. The Scot will meet Denmark’s Mia Blichfeldt in the final.

After the fight, an obviously delighted McCormack said: “I’m over the moon. I came here for the gold and I’ve got it so I’m a happy man. It was a good fight against a strong Russian but I kept my composure and picked the better shots. Commonwealth gold was a good one but European Games gold is even better, it’s my biggest achievement so far.”

Bitter disappointment for Ben Whittaker followed in the next bout with a split decision victory for the boxer from Azerbaijan, Loren Dominguez Alfonso. However, in his first European Games a silver medal was undoubtedly a strong showing for Whittaker and he admitted that in time he would see it as a positive but not right now: “I thought I had done enough to nick it but you can’t just do enough to nick it you have to win convincingly. I enjoyed it and thought I got the cleaner shots but I’m not going to complain and the next time I have to make it more convincing.”

“Every time I put a Great Britain vest on it’s a dream come true. I remember watching the first European Games and thinking even making it to the next one would be an achievement and I’ve made it on to the podium but me being a bit greedy I wanted it to be a gold medal. Looking back in a few months I’m sure I’ll be happy with the achievement but right now I am very disappointed.”

The third boxing medal of the day went to Team GB’s -52kg fighter Galal Yafai as he collected his bronze medal.

At track cycling Jack Carlin was knocked out of the men’s sprint at the quarter-final stage after losing in the first two heats to Denis Dmitriev of Russia who went on to win the bronze.

In another GB sprint-off, Katy Marchant and Sophie Capewell faced each other in the women’s sprint 1/16 repechage. A close race was taken to photo finish with Marchant inching through to the 1/8 finals where she exited the competition in the repechage.

Twenty-year-old Jess Roberts put in a spectacular effort in the omnium heading into the final race, the points race, in third place. Near the end of the race she slipped down to fourth in her first senior omnium but an impressive finish all the same.

The first of the artistic gymnastics finals took place at the Minsk Arena with Georgia-Mae Fenton and Giarnni Regini-Moran competing in the all-around finals. Both gymnasts couldn’t quite find their top form and replicate their qualifying performances with Fenton finishing in eighth place and Regini-Moran in 13th. They both have further finals to look forward to with beam finals for Fenton and vault and floor finals for Regini-Moran.

Elsewhere in the wrestling it was confirmed Georgina Nelthorpe placed seventh in the women’s -76kg category, Team GB’s best ever performance in the event. Reflecting on her performance, Nelthorpe said: “It went really well, it was a very tough competition, so I’m really proud of myself. It was a bit of a slow start, I think that was just down to nerves, we went into the second round quite close and she went for a leg attack and scored, I was able to counter, get control and pin her. The first match is always the hardest, so it meant a lot to win.

“The second match I thought I was a bit unlucky, she was quite technical and you could tell she was experienced, but I was happy with where I was mentally and I feel like I’m catching these guys up and in some cases overtaking them. It was just a shame that having lost, she (Aliyeva) couldn’t then beat her next opponent as I would have had a shot at bronze, but when the result came in I was ecstatic to finish in the top eight. You couldn’t get the smile off my face. Representing Team GB was a dream come true, I couldn’t ask to be part of a better team.”