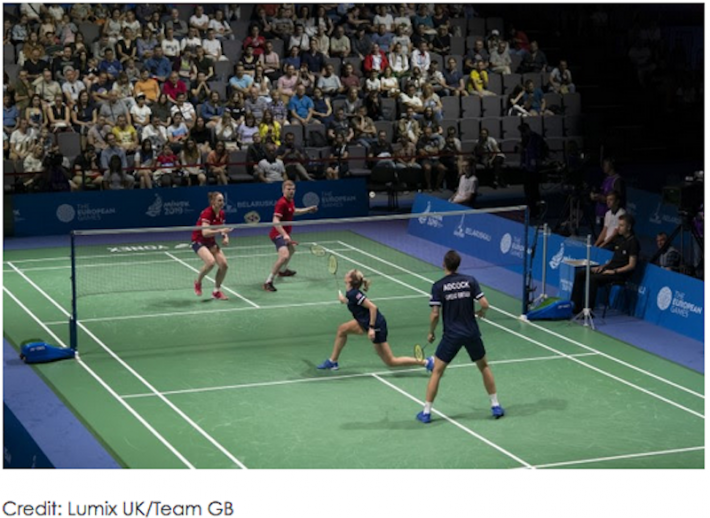 On the final day of competition at the European Games in Minsk, Team GB added seven medals, including three golds, to place them ninth in the table with 23 medals in total.

Badminton was undoubtedly one of the success stories of the Games with five medals from a possible seven events. Marcus Ellis and Lauren Smith triumphed over Chris and Gabby Adcock in the all-British European Games mixed doubles final.

Ellis and Smith, who were seeded number two in the competition, secured a convincing victory over their teammates, winning the gold medal match in straight sets (21-14, 21-9) with the Adcocks taking silver.

The win meant that Ellis, who carried the Union Flag at tonight’s closing ceremony, picked up his second gold medal of the Games, following men’s doubles victory with Chris Langridge last night, while Smith will walk away from the Games with two medals also, having previously secured silver with Chloe Birch in the women’s doubles.

Speaking after the victory, Smith said, “It’s a dream come true to be European champion. Coming into this week, we knew winning was possible, but it was always going to be hard. We’ve played a lot of games and it’s been a real battle at times, but we’ve dominated in most of the rounds throughout the week and put out some of our best performances to date.”

Adding to the medal tally, Kirsty Gilmour won Team GB’s fifth badminton medal of Minsk 2019, collecting the silver in the women’s singles competition, after the Scot lost 21-16, 21-17 to Mia Blichfeldt of Denmark.

Jess Roberts and Megan Barker secured their second medal of the Games with a gold in the madison. The pair, who won silver in the team pursuit on Friday secured an early lead by lapping the group and managed to maintain their advantage with the Netherlands finishing two points behind.

Barker said: “We got in quite early trying to get the lap and we picked up two sprints on the way to getting the lap so that gave us quite a big lead. We put a lot in early on so in the last half we were hanging on there and it got a bit close towards the end but we hung on so it was good.”

Josie Knight raced in the bronze medal final of the individual pursuit and finished fourth behind Tamara Dronova of Russia. Jason Kenny and Joe Truman failed to reach a medal race in the men’s keirin and raced in the 7-12 place final where they finished 7th and 10th respectively.

Lauren Price put in a classy performance in her -75kg final against Dutch fighter, Nouchka Fontijn, never once seeming flustered or in trouble. Price’s superior speed and agility made up for the size she forfeited to her opponent and it was no surprise when the verdict went to the Welsh fighter.

“I said it would be a good fight and I would need a good performance and that’s what I delivered,” said Price. “She’s a world class fighter and an Olympic silver medallist and I knew I had nothing to lose and just to let it flow.

“I felt calm. I used my speed and my foot work. I stuck to my gameplan, had a big second round and here I am as European Games champion. I can’t believe it really.” In addition, three bronze medals, those of Peter McGrail, Luke McCormack and Cheavon Clarke were all collected at the Sports Palace Uruchie, completing an impressive week for boxing with seven medals.

Regini-Moran’s floor routine was spectacular. He hardly moved landing any of his difficult tumbling passes and the judges rewarded him with a score of 14.233 for the first Team GB gymnastics medal of the Games.

He said afterwards: “This means a lot to me. It’s almost three years to the day that I was injured and since then it’s taken a lot of patience and hard work to get back, at points I wasn’t even sure I’d be able to. Winning this medal feels very special, I feel like I’m back.”

Downie produced a masterclass on the uneven bars scoring an impressive 14.400 points to take silver with the final gymnast Melnikova pipping her to the title by just .066. Like Regini-Moran, Downie has battled through injury but has demonstrated at these Games that she’s returned to top form.

She said after her contest: “This was about delivering two clean routines and proving to myself that I can still do it and I’m still good enough, because those thoughts are always in the back of your mind. It feels great to have a medal around my neck again and know I’m moving in the right direction.”

Elsewhere in the gymnastics, Regini-Moran also placed sixth on vault, with Georgia-Mae Fenton fifth on beam and Brinn Bevan sixth on parallel bars.

In the karate, a highly competitive field where outside the host nation only seven could qualify in each weight, Joe Kellaway competed in the men’s -75kg and Amy Connell in the women’s -55kg. Both fighters had done exceptionally well just to qualify but didn’t progress further in the competition after losing their three round fights.