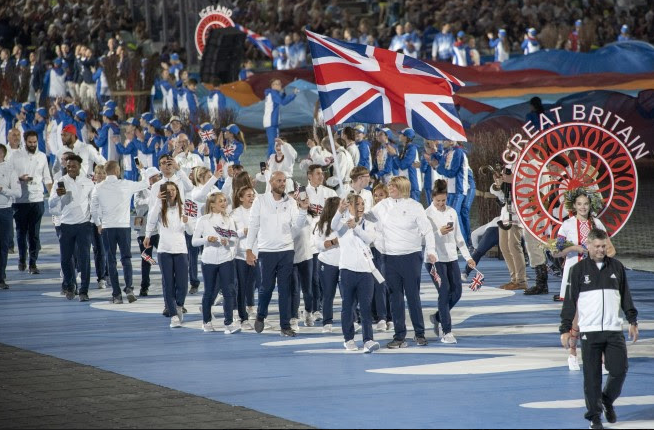 The second European Games in Minsk, Belarus, got underway with the first of Team GB’s athletes taking part in competition before culminating in the Opening Ceremony at Dinamo Stadium.

eam GB’s campaign began on the archery range with the men’s recurve and women’s compound in action for the ranking rounds.

Patrick Huston (666), Tom Hall (661) and Alex Wise (648) scored in the top 25 in the men’s event. Huston will receive a bye into the last 16 whilst Hall and Wise will face the round of 32 on Monday against Albanian Jurgen Hoxha and Italian David Pasqualucci respectively. The cumulative score (1975) saw the men’s team sitting in fourth place to put them in a match up against Italy (1958) in the last four elimination round today.

Lucy Mason finished with 681 in the women’s compound meaning she will face the Turkish fifth seed Yesim Bostan (697) today.

The afternoon saw women’s recurve and men’s compound get underway. Adam Ravenscroft finished with 696 in the individual compound, securing him a match-up against home favourite Maksim Ban (693) on Sunday.

The upshot means that Bettles and Pitman could end up coming up against each other should Pitman defeat Kosovan archer Ardita Zejnullahu on Tuesday. Elsewhere, a bye into the last 16 will see Folkard face either Bulgarian, Dobromira Danailova or Italian, Vanessa Landi. Team GB women’s recurve team will face off against Turkey today.

In the recurve mixed team competition Huston and Folkard placed seventh with the scores from the day, which saw them pre-seeded against Ukraine defeating them 5-3 to progress to face France in quarter-finals. Ravenscroft and Mason (1377) received a bye in the compound mixed team event and will face number two seed Netherlands (1398) on Sunday.

Speaking after the action recurve archer Tom Hall said: “I’m a little frustrated but I’m also looking at the bigger picture. It’s not the best I could have scored but it’s still done the job and I’m alright where I am in the seeding but maybe I should’ve been a bit higher.”

Patrick Huston said: “I’m pretty happy with how I finished up today. I missed a few lines that if I’d been slightly on the other side I would have had five to 10 points more but I’m pleased overall with today’s score.

“We shot really well in the mixed team event. Naomi and I are probably the most seasoned competitors on the team, get on really well and have won medals together. We opened with 38 and closed with a 39 which was a very high standard of archery.”

Speaking about a potential match against her teammate, Bryony Pitman said: “I’m maybe a little disappointed but I know it’s progress from where I was last year, which means I always look at the bigger picture and positives to take from it.

“Assuming I make it through my match I will face Sarah, we know we will have somebody in the last 16 which is great as a team but we’ll both want to be that person.”

The 120km will be the first of the cycling events on the programme with the men tackling 180km of the route the following day.

Table tennis players Tin-Tin Ho and Charlotte Carey start their respective bids for the women’s singles title tomorrow morning at the Tennis Olympic Centre. Ho gets the women’s competition underway facing Anna Kirichenko of Finland in round one, while Carey enters in round two and will play Austria’s Amelie Solja.

In the men’s singles, Sam Walker will take on Pavel Platonov from host nation Belarus, after receiving a first round bye. Teammate and number four seed, Liam Pitchford, comes into the third round and will make his Minsk 2019 debut on Sunday evening.

Team GB’s trap shooters will enter the first three rounds of qualification on Saturday with a view to reaching Sunday’s Olympic Trap final. Abbey Ling, Kirsty Barr, Matthew Coward-Holley and Aaron Heading are all in action and will look to add further Tokyo 2020 quota places to the two they’ve already received courtesy of Barr and Coward-Holley’s World Cup medals.

The tournament doubles up as the European Championships, with all points earned counting towards the 2020 Olympics qualifying process, a critical staging post on the road to Tokyo.

Ashley McKenzie will be hoping he can add a European Games medal to his multiple British and international titles. He takes good form into the European arena having finished on the podium at the Grand Prix in Turkey earlier in the year with a bronze.

Having secured three international podium finishes (one silver and two bronze) in 2018, Chelsie Giles will also be looking to continue her form on the international stage.

At the Minsk Arena the gymnastics begins with acrobatic gymnasts Erin Henderson, Sacha Muir and Team GB’s youngest competitor – 15 year old Chloe Rowlands – competing as a group. The Dunfermline trio compete for medal glory in the dynamic and balance events.

Boxing gets underway tomorrow at the Sports Palace Uruchie with three round of 32 bouts. First up will be Pat McCormack (-69kg) against Laszlo Kozak from Hungary, before Mark Dickinson (-75kg) kicks off his campaign against Irish boxer Michael Nevin and Ben Whitaker (-81kg) closes out the day against Polish fighter Mateusz Goinski.

For any media enquiries or for further information regarding Minsk 2019, please contact Thomas Rowland