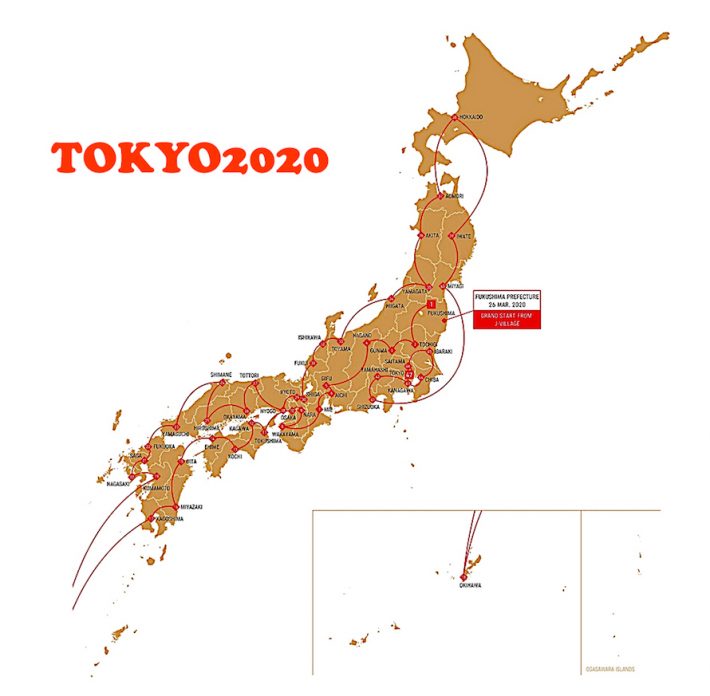 in the final 121 days culminating in the Olympic Games,

igniting enthusiasm across Japan and around the world. Tokyo 2020 also unveiled the torchbearer uniforms, the Tokyo 2020

Torch Relay Background Music and the application guidelines for members of

the public eager to participate as inspirational torchbearers in the Tokyo 2020 Olympic Torch Relay.

Commencing its journey on 26 March 2020 from the J-Village National Training Centre in Fukushima Prefecture,

the Olympic flame will traverse all 47 prefectures of Japan, passing by many of the nation’s most

famous and cherished sights, for a period of 121 days, serving as a symbol of the Olympic Games and

visiting 857 local municipalities along the way.

Sites for the celebrations planned in each prefecture have also been announced.

The route has been designed to ensure that large numbers of people across Japan will be able to line the roadsides, cheer on the torchbearers and create a festive atmosphere.

Around 98% of Japan’s population live within one hour by car or train of the proposed route of the Tokyo 2020 Olympic Torch Relay.

The Tokyo 2020 Olympic Torch Relay route will take in World Heritage Sites such as Mount Fuji and Itsukushima shrine and other historic locations and popular places, including favourite local community spots, with the charm of each being showcased during the Relay. The Relay will also take in areas that are continuing to recover from natural disasters, such as the Tohoku region, which was struck by the 2011 earthquake and tsunami.

Overall, the Olympic Torch Relay will feature around 10,000 torchbearers including men, women and children from a wide range of nationalities, ages and abilities. Members of the public are invited to share directly in the excitement and passion of the Tokyo 2020 Olympic Torch Relay by submitting their application for this once in a lifetime opportunity beginning in June.

In line with our Relay vision of “Hope Lights Our Way”, preference will be given to applicants who embody one of the following three spirits:
-those who provide essential support for family members, friends and colleagues on a daily basis, or have demonstrated the ability to overcome great adversity
-those who are accepting and tolerant of people from different backgrounds and who lead initiatives to welcome newcomers into their local community
-those who are able to engender a sense of togetherness in their local community

Applicants must be born on or before 1 April 2008; the consent of a parent or guardian will be required for those who will be aged 17 or under on 1 March 2020. People residing outside of Japan are also eligible to apply.

Members of the public with the inspiration and passion to be torchbearers can submit up to five applications via the Tokyo 2020 Olympic Torch Relay Presenting Partners and/or through any local prefecture where they have a personal or family connection. Successful applicants will only be selected to participate once. Each of the 47 prefectures in Japan has set up its own Olympic Torch Relay Taskforce in collaboration with Tokyo 2020. Applications to prefectures can be made from 1 July.

The Tokyo 2020 Olympic Torch Relay Presenting Partners are Coca-Cola Japan, Toyota, Nippon Life and NTT Communications. Coca-Cola Japan will start accepting applications on 17 June; Toyota, Nippon Life and NTT from 24 June. Details of how to apply via Presenting Partners and/or prefectures will be provided in due course on our official website. Announcement of the successful applicants will be made after December 2019.