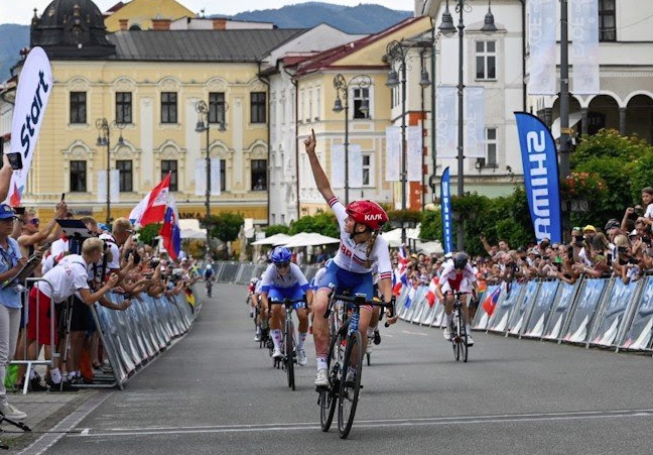 Team GB claimed two more medals on day four of the Banská Bystrica European Youth Olympic Festival (EYOF), with one gold and one bronze taking the tally up to nine.

Sixteen-year-old cyclist Cat Ferguson beat a 70-strong field to the top of the podium in the today’s road race, finishing in 12:11.58 with Spain’s Ostiz Taco and Italy’s Temperoni falling in behind to claim silver and bronze. Ferguson became the first Team GB medallist at the EYOF on day two in Banská Bystrica when she secured her first gold in the girls’ time trial.

Ferguson’s medal today comes partly thanks to tactical support from teammate Carys Lloyd, 15, who sacrificed her own race with an early sprint attack to help tee Ferguson up for the win. Also competing was 16-year-old Imogen Wolff, who fell foul to a puncture but regained ground to take seventh place overall, while Lloyd dropped back to finish in 17th.

Ferguson said: “My first EYOF has been amazing. I never, ever thought it would be possible to win two gold medals. I’m just so grateful to Team GB, to British Cycling and to Carys and Imogen for making it happen.”

Lloyd said: “We went into the race with a plan. We made sure that when Cat was away, I was resting, so that when I went to attack to tire out the opposition, I was giving her the best chance of being able to sprint at the end – and obviously she delivered! It’s been awesome to be part of it.”

Seb Grindley, Finlay Tarling and Sam Fisher each battled it out in the boys’ road race, to finish in 12th, 26th and 61st respectively in a field of over 90 competitors.

Over in the pool, Oscar Bilbao, Conor Cherrington, Skye Carter and Phoebe Cooper teamed up to take bronze in the final of the mixed 100m medley relay. They took their place on the podium alongside Germany, who took gold, and Romania, who took silver.

Bilbao said: “Just before we dived in, going through my mind it was just to hold the position. To win a medal is such a huge privilege, and that was the aim at the end of the day. I didn’t want to let the team down, so I just wanted to do as well as possible.”

Carter said: “I’m just so happy with myself and the whole team. When I came here I was not expecting to win a medal. I was hoping to make a semi-final, but I wasn’t expecting to make a final, let alone get on the podium afterwards!”

Cherrington also lined up for the final of the boys’ 200m backstroke but narrowly missed out on another medal, coming in fourth place in a time of 2:05.27.

Outside of the relay, Bilbao and Cooper both won their respective semi-finals in the boys’ 100m breaststroke and the girls’ 200m individual medley, putting them each in good stead for tomorrow evening’s finals.

In gymnastics, 16-year-old Danny Crouch and 14-year-old Abi Martin joined forces to compete in the new mixed pair category, with a strong performance landing them in fifth place overall.