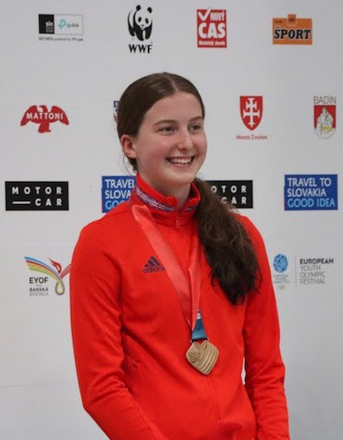 The penultimate day of the Banská Bystrica European Youth Olympic Festival (EYOF) saw Team GB almost double their medal haul, with eight in a single day taking the running total up to 17.

Team GB’s swimmers today picked up six medals in total, including three golds, while the gymnasts banked another gold and silver.

Phoebe Cooper, aged 14, won gold in the girls’ 200m individual medley, with Blythe Kinsman and Krawiec each winning a bronze – for Kinsman in the girls’ 100m backstroke and for Krawiec in the boys’ 100m butterfly.

Cooper said: “The race felt really good and the environment this week was awesome, I don’t think you’re going to get any better than that!”

In gymnastics, 16-year-old Danny Crouch claimed his second medal of the competition when he won gold in the final of the boys’ floor with a score of 13.900. He beat Ukraine’s Stelmakh and the Netherlands’ Abaidi to the top spot, after winning silver earlier this week with teammates Oakley Banks and Reuben Ward, both 17, in the boys’ artistic gymnastics team final. In the girls’ competition, 15-year-old Ruby Evans won silver in the vault. She took her spot on the podium alongside Germany’s Kevric, who claimed gold, and Denmark’s Jacobsen in bronze.

Crouch said: “I was really proud today. Competing against the best in Europe and coming away with a gold medal was really unexpected. I knew I’d be up there if I did a clean routine, but to get the gold was amazing.”

Today Crouch and Ward also both competed in the final of the boys’ pommel horse competition, with Crouch coming in fifth place and Ward in eighth overall.

Seventeen-year-old Anya Hassan was the only Team GB judoka in action today but missed out on a spot in the second round after early defeats to Serbia’s Stjepanovic and Finlan’s Krapu.