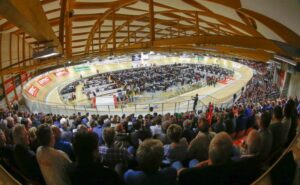 Russia is the country which dominated the 2021 edition of the Juniors and Under 23 Track European
Championships held at the Apeldoorn Omnisport (Netherlands).
Russian riders came top in the final medals table winning a total of 29 medals: 16 gold (out of the 44 on offer),
8 silver and 5 bronze, in front of Great Britain (10, 9 and 8) and Italy (7, 3 and 4).
The continental race, which was raced by 399 riders from 27 countries, also showcased some very promising
individuals such as the Italian Silvia Zanardi who won three gold medals in the Under 23s: Team Pursuit, Points
Race and Individual Pursuit. The Russian Alina Lisenko who won the four titles available in the Sprint
disciplines: 500 metres and Keirin, Team Sprint and Sprint. Three titles also went to the Junior British rider
Millie Couzens (Omnium, Team Pursuit and Madison) and Zoe Backstedt (Individual Pursuit, Team Pursuit
and Madison) and to the Italian Chiara Consonni who won the Under 23 gold medal in the Elimination, Team
Pursuit and Madison together with Martina Fidanza.
During the Championships, two new world records were set: the Women Juniors Team Pursuit (4’21”417) by
the Great Britain team with Grace Lister, Madelaine Leech, Millie Couzens and Zoe Backstedt who also
achieved a new record in the Individual Pursuit riding the 2000 metres of the race in 2’17”489 (the previous
record of 2’18”080 was held by the New Zealander Ellesse Andrews).
Among the other important results included wins in the Under 23s by Maria Martins (Portugal) in the Omnium,
Vlas Shichkin (Russia) in the Under 23 Points Race, Mikhail Iakovlev (Russia) in the Under 23 Sprint and
Keirin and Milan Kadlec (Czech Republic) in the Juniors Points Race.
The European Championships, which ended today, have been organised four times at the Apeldoorn
Omnisport and the organisers Libema Profcycling are already in the process of putting forward their bid to host
the 2024 Elite Track European Championships, which will be part of the qualification system for the Paris
Olympic Games.
The next edition of the Juniors and Under 23 Track European Championships will be held in Anadia (Portugal)from 14 to 19 July 2022. 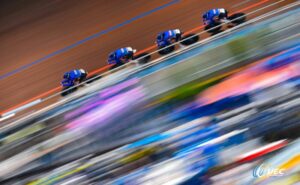