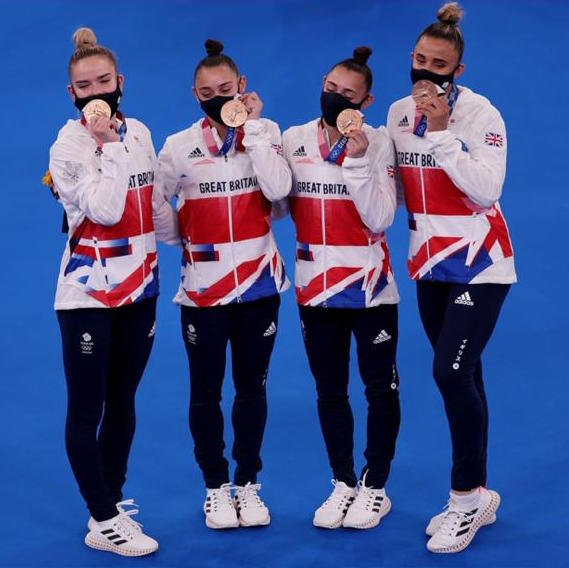 Young artistic gymnasts fight back to win historic women’s team bronze,after delivering a spectacular performance to battle back for bronze in Tokyo.

Team GB were down the standings after the first two rotations but a brilliant comeback on the vault and uneven bars saw Jessica and Jennifer Gadirova, Alice Kinsella and Amelie Morgan leapfrog Italy and Japan.

They finished with a combined 164.096, just 0.458 points more than the fourth-placed Italians.

They opened up on the beam and Alice Kinsella, the Commonwealth champion, put her tumble in qualification behind her with a solid 13.333.

That helped them to a combined score of 38.866, while they stayed seventh after the floor routine, with Jessica Gadirova top-scoring with 13.833.

However, their night changed on the vault as both Jessica and Jennifer Gadirova earned 14.433s from the judges and Kinsella was close behind on 14.266.

That left them fifth and still with an outside chance of a medal going to the uneven bars.

That momentarily put Team GB top, and while they were overtaken by the Russia Olympic Committee and USA, all eyes were on Italy’s scores.

Jennifer Gadirova, 16, from Aylesbury, said: “Really, I can’t believe it, it is more than a dream come true.

“My dream was just to make the Olympics and have an experience and even being here for this Olympics was an achievement in itself.

“My biggest aim was to make Paris 2024, even being here was a big achievement let alone coming away with a medal that is just incredible. No words, really.

“We were looking at the scores and we were just happy with whatever everyone’s scores were as they come through, we were happy.

“We saw we were in first, and we were like, ‘okay, our score was actually quite good’ and we were over the moon that we beat our score in qualification anyway so we were happy anyway.”

Jessica Gadirova, 16, from Aylesbury, said: “I never thought this was possible but it is and just it is has gone beyond what I ever expected and what I ever dreamed of, I am just speechless and don’t really know what to say and to feel, it is just incredible.

“She [Jennifer] means the world to me, she is everything. She has been with me every second since we touched this earth and to experience this and medal with her is just amazing.

“Just making history and putting our names out there, we are just stronger together really.”

Amelie Morgan, 18, from Slough, said: “I couldn’t quite believe what I was seeing. I had to pinch myself to check that it was real.

“We were absolutely speechless, I didn’t know what to think – I was just over the moon.

“We’ve had quite a lot of criticism saying that we’re an inexperienced team, a young team, and I think we’ve done so well to put that behind us.

“We’ve made history and proved no matter how old you are, how experienced you are, we were selected for this team for a reason and we came here and we did it.”

Alice Kinsella, 20, from Sutton Coldfield, said: “Qualification didn’t go the way I wanted it to go but the main aim was to make team final and that happened.

“We came in today to enjoy it, get the experience, but coming away with a medal feels absolutely amazing.

“After vault, I looked up [at the scores] and thought we could potentially get a medal, so I was thinking about going and doing the best bars rotation I could ever do, which I did – I came away with a PB so I was really happy with that.

“When we saw we came third, I was speechless – on the floor, crying and everything. I couldn’t hold it in.”