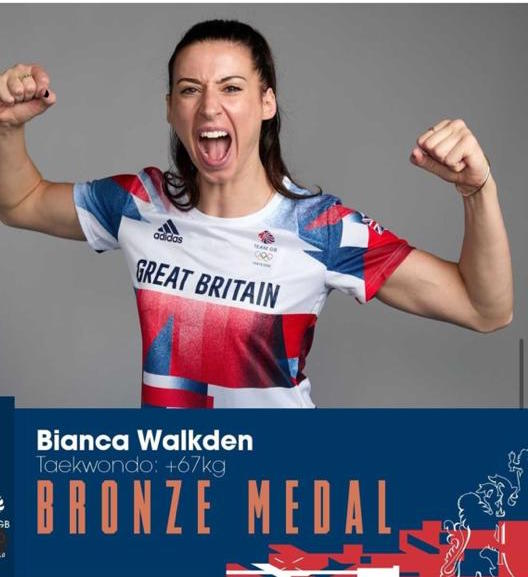 The world champion and world number one was edged out in her 67kg semi-final in a close and cagey contest with South Korea’s Lee Da-bin – who overhauled Walkden’s lead with a high-scoring head kick in the very last second.

But she picked herself up to win the bronze medal match against Poland’s Aleksandra Kowalczuk, maintaining a narrow advantage throughout before securing a 7-3 victory.

She said: “I’m glad I came away with an Olympic medal but it was not the colour I trained for or expected.

“I gave my heart and soul in that semi and was a little bit unlucky with some of the decisions.

“I wanted to come out and be a true champion like I train for every day, I wanted to stand there with my held high and fight no matter what.

“I feel a little bit dead inside and it’s killing me. It’s a medal just not the colour I wanted, I might paint it over when I get it home, no-one has to know.

“I’ll be proud when I get a gold, it’s only three years away. I’m not that far off, I’m a three-time world champion, three-time European champion, I’m world number one and I’ve got two Olympic medals, anyone else would die for that and I need to remember that.”

Walkden was picked up by team-mate and double Olympic champion Jade Jones after losing her semi-final, admitting she found it hard to come back out to contest the bronze.

Muted celebrations followed her victory and she insisted there were no regrets about her game plan.

She added: “I didn’t want to run around with the flag afterwards but I wanted to say thank you to the coach, the physio and all the people involved. It was really hard to do but it was for my friends and all my family. Deep down I was dying to cry.

“The whole fight wasn’t going my way. I was raring to fire and put the shots in but the referee nearly disqualified me and I didn’t think I was doing that much wrong. I wanted to attack but I got grabbed.

“It’s ‘shoulda woulda coulda’, I’m an attacker and I gave it everything I’ve got. Maybe another day with another ref it would have been a whole different score.

“The last few hours have been hard, they tried to pick me up and said I’d have more regret not going for it. Now I can cry and let it all out but I had to hold it in as much as I could and just be professional.”

Team GB’s taekwondo fighters leave Tokyo with two silvers and a bronze – medals that could have been different. Bradly Sinden and Lauren Williams were both leading their final fights with eight seconds remaining, in addition to Walkden’s last-gasp loss.

“The team was absolutely fantastic and we were so close to two golds, it shows how good this sport is and anything can happen, it’s so fast and exciting to watch,” added Walkden.

“Hopefully more people are invested in it but we should have come away with a lot more. Maybe we can get six qualifications in Paris and come away with six gold medals. We’re definitely a team to watch.

“More people are realising how fast taekwondo is, it’s not a coincidence or a curse. Everyone fights to the end, that should showcase the sport and show how quick and dynamic it is.”