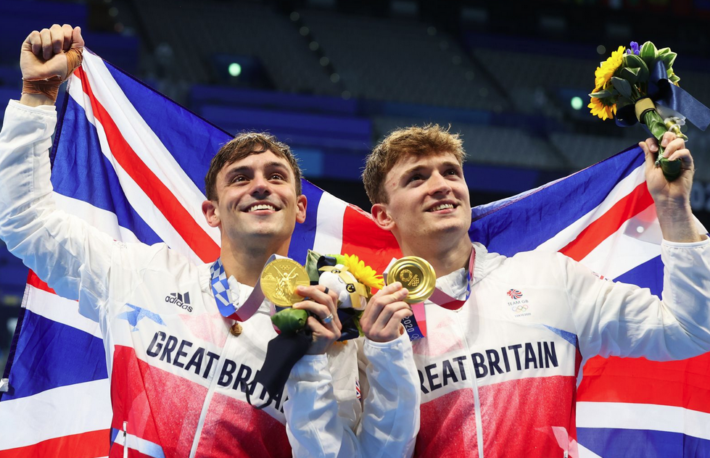 Tom Daley and Matty Lee produced the performance of a lifetime to claim Olympic gold in sensational fashion at the Tokyo Aquatics Centre.

For Daley it marks the culmination of a remarkable career. A bronze medallist at London 2012 and again in Rio five years ago, he now has a gold to his name after making his Olympic debut aged just 14 at Beijing 2008.

For Lee, the gold comes much earlier in his Olympic career with Tokyo 2020 being his debut Games. The duo showed incredible consistency and finished with a flourish.

“It’s kind of unbelievable. I’ve dreamt, as has Matty, since I started diving 20 years ago for this moment of becoming an Olympic champion,” said Daley.

“To take it to my fourth Olympic Games when I think a lot of people would have not considered it to be my peak Olympic Games, I thought I was going to win an Olympic gold medal in Rio and that turned out the complete opposite by a long shot.

“It was my husband [Dustin Lance Black] who said to me my story wasn’t finished and that my son or child, we didn’t know at the time, needed to be there to watch me win an Olympic gold medal.

“The fact that I can say my son watched me become Olympic champion, albeit on TV and they couldn’t be here, is such a great feeling.

“To be able to do it with your best mate as well and to share that moment. At the back of the podium when you’re by yourself, it’s all internalised, but when you have someone that’s done it with you, you don’t feel bad about saying ‘oh my goodness, we just bloody did amazing!’

“To be able to share that moment with someone has been a wild ride, but I’m very, very happy right now.”

But a brilliant fourth dive from the Brits, combined with a slight slip-up from their rivals, allowed Daley and Lee to take the lead.

They needed no second invitation and despite holding a lead of just 1.74 points going into the final dive, the British pair nailed it.

A score of 101 on their last dive – a forward 4 ½ somersaults tuck – left the Chinese needing to be perfect.

They got their last dive right, but could not overhaul the Brits, Daley and Lee scoring 471.81 to 470.58 for their challengers – sparking a huge outpouring of emotion for the British pair, as well as the rest of their teammates, cheering on from the stands.

“We knew we got a silver, definitely guaranteed a silver. There’s a little Omega timing board that will either come up with one or two when the Chinese dive and it comes up before the big one so we knew to look at that,” said Lee.

“We were just waiting and hoping and keeping our fingers crossed that we’d see a two. When we did, I lost my crap!”