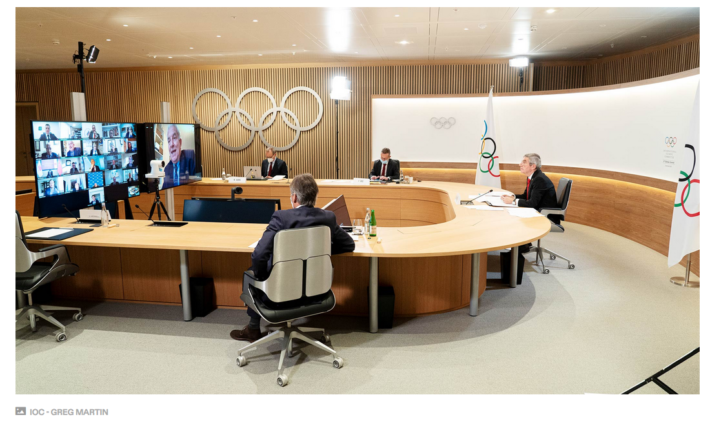 At the invitation of the International Olympic Committee (IOC), the leading representatives of the Olympic Movement met today for the 9th Olympic Summit, which was held virtually.

-International support for the role of the Olympic and Paralympic Movement

-The international fight against doping

International support for the role of the Olympic and Paralympic Movement.

The Summit warmly welcomed the most recent declarations of the G20 Leaders’ Summit and the United Nations (UN) General Assembly concerning the role of the Olympic and Paralympic Movements.

In particular, the UN resolution – adopted by consensus – notes the “invaluable contribution of the Olympic and Paralympic movements in establishing sport as a unique means for the promotion of peace and development”. It also “acknowledges the Olympic Charter, and that any form of discrimination is incompatible with belonging to the Olympic Movement”.

The UN resolution went even further, underlining the autonomy of sport and the leadership role of the IOC for the Olympic Movement, and the IPC for the Paralympic Movement. It highlighted the positive role that sport plays in society and specifically during the COVID-19 crisis. The resolution also supported the IOC’s call to include sport in the post-COVID-19 recovery programmes of the governments of the world, by calling on all the UN Member States to do so. The Summit requests members of the Olympic Movement to take this opportunity to turn to their national governments to ensure the implementation of this.

The Summit noted with satisfaction that the resolution expressed strong support for the Olympic Games. The resolution welcomed, “with appreciation all upcoming Olympic and Paralympic Games, in particular those to be held in Tokyo in 2021, Beijing in 2022, Paris in 2024, Milano-Cortina in 2026 and Los Angeles in 2028”. Support for the upcoming Olympic Games hosts, specifically for Tokyo and Beijing, was also echoed in the Final Declaration of the G20 Virtual Leaders’ Summit.

The Olympic Summit agreed that such a great demonstration of support by the international community is a real milestone for the Olympic community.

The Summit expressed its full commitment to and confidence in the successful organisation of safe and secure Olympic Games Tokyo 2020, starting on 23 July 2021.

The Summit conveyed its appreciation and gratitude to the Japanese Government, the Tokyo Metropolitan Government and the Tokyo 2020 Organising Committee for their excellent work, noting in particular the extremely diligent work on the COVID-19 countermeasures, and also the approval of the revised budget due to the impact of the COVID-19 pandemic.

The Summit agreed that the top priority remains the health and safety of all participants. In this regard, it was highlighted that a toolbox of COVID-19 countermeasures has been developed for every possible scenario.

State-of-the-art rapid testing methods and vaccines will be added to this toolbox. With regard to vaccines, the Summit took note of and appreciated the IOC’s role in a worldwide pro-vaccination campaign, and agreed on the participation of all the Olympic Movement stakeholders in this campaign.

The Summit also expressed its full commitment to and confidence in the Olympic Winter Games Beijing 2022. The Summit participants were advised about the COVID-19 countermeasures being prepared for the Games by the Chinese authorities. Technical preparations for the Games are going extremely well despite challenges in the test events programme due to COVID-19-related restrictions. All the venues are due to be completed by the end of 2020.

The international fight against doping in sport

After an update by the President of the World Anti-Doping Agency (WADA), Witold Bańka, the Summit thanked WADA for its leadership role in harmonising the global fight against doping. Furthermore, the Summit supported the President of WADA and his initiative to drive reforms of the Agency’s governance within the framework of the current structure, which is based on the partnership between governments and the sports movement. They also welcomed the recent decisions of the WADA Executive Committee in this regard.

In this effort, global cooperation between sport and governments needs to be strengthened under the auspices of WADA. The worldwide system, which includes WADA, the Court of Arbitration for Sport (CAS), the governments of the world and the International Federations (IFs), with the full participation of the athletes, must not be jeopardised by unilateral actions of governments or individual sports organisations. The Summit reiterated that the fight against doping in sport can be credible and successful only if it is based on a system of globally accepted rules and seamless international cooperation.

President Bańka told the Summit that: “enhancing WADA’s governance does not mean changing its DNA. WADA was created to be a cooperation between the sports movement and governments of the world, and this is the only way it can efficiently fight against doping in sport globally. This is respected both in its structure and in its funding.  Adding independence to the current system, in particular to the Executive Committee, is the right thing to do and is being done. The significant progress WADA has made on governance reform continues to evolve in line with international best practice.”

The Summit was informed by the Chair of the IOC Athletes’ Commission (AC), Kirsty Coventry, about an ongoing wide-ranging dialogue with athletes around the world on how to ensure that the athletes can express their support for the shared Olympic values while at the same time respecting their fellow competitors and the rules of the field of play.

This IOC AC consultation process is currently underway, with a qualitative discussion with National Olympic Committees (NOCs)’ and IFs’ ACs, as well as a quantitative survey among the athletes of all 206 NOCs.

Ms Coventry told the Summit: “We have also received further feedback from athletes from many other NOCs, such as Australia, Canada, Ireland, Germany, Mexico and Nigeria, to name a few. Many others have also expressed their opinion in quantitative regional surveys or in qualitative consultations. Much of this feedback is available publicly.”

The Summit took note of the IOC Athletes’ Commission’s quantitative and qualitative survey and consultation and the fact that the Commission will make its recommendations to the IOC Executive Board after the consultations are concluded.

IPC President Andrew Parsons informed the Summit about a statement by the Chairperson of the IPC Athletes’ Council which refers to a similar procedure within the Paralympic athlete community. The statement explains that “the majority of Paralympians and Para athletes would welcome an opportunity to express themselves during the Games but in a manner that still requires such expressions remain outside the field of play, podium and ceremonies. Athletes were very clear that they want Tokyo 2020 and future Games to be remembered for sporting achievements more than anything else.”

The result of the consultation will be presented to the IPC Governing Board by late February 2021.

The Summit heard the report by David Lappartient, who provided an update on the latest developments in virtual sports and gaming, as the Chair of the Esports and Gaming Liaison Group.

The Summit noted the importance of differentiating between on the one hand the two forms of virtual sports and on the other hand gaming. Mr Lappartient highlighted that there are both physical (like with cycling) and non-physical forms of virtual sports (as with football), while gaming includes both competitive gaming (as with League of Legends) and casual gaming (as with Super Mario).

The Summit agreed that it is essential for IFs to embrace both the physical and non-physical virtual forms of their respective sports, with a focus on regulating fair competition, respecting the values of sport in these virtual forms, and reaching out to new audiences.

With regard to gaming, the Summit agreed contact would be maintained with gamers as a gateway to promoting physical activity and the values of sport to young generations.

The Summit is looking forward to the full report on the evaluation of Olympic Agenda 2020 due at the 137th IOC Session in March 2021 in Athens.

René FASEL, President of the IIHF

Jan DIJKEMA, President of the ISU

Andrew PARSONS, President of the IPC

David LAPPARTIENT, President of the UCI and Chair of the Esports and Gaming Liaison Group