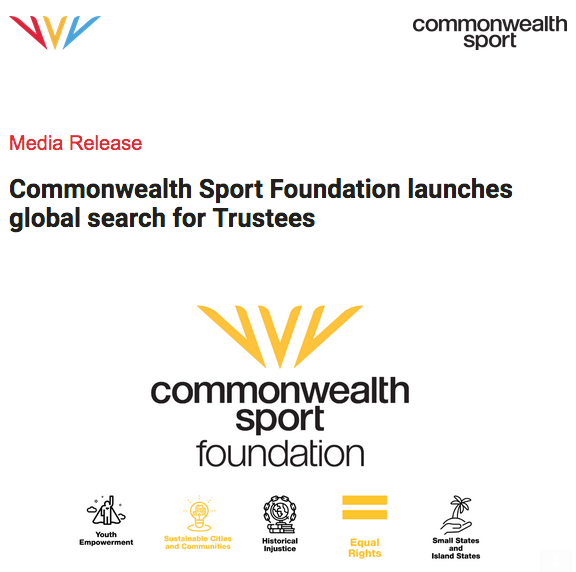 The Foundation was launched in August this year with an ambition to help address some of the world’s greatest challenges. It will focus on: Youth Empowerment; Equal Rights; Historical Injustice; Small States and Island States; and Sustainable Cities & Communities.

Following an extensive search and recruitment process, Christian Brodie has been appointed as Chair of the Foundation with Baroness Tanni Grey-Thompson named as Interim Vice Chair, a position she will hold until the conclusion of the Birmingham 2022 Commonwealth Games.

Brodie undertakes the Foundation Chair role having spent the majority of his business career as a lawyer and then corporate financier working on major international development projects. He retired from UBS in 2013, having served on the Group Management Board and as Vice Chair of their Investment Bank. He has held non-executive Chair roles across a number of organisations in the private, public and third sectors, including Pentathlon GB, the South East Local Enterprise Partnership, the University of Sussex (including as Pro Chancellor) and the Student Loans Company.

Baroness Grey-Thompson is one of Britain’s most recognised and successful Paralympic athletes. She is 11-time Paralympic Champion, seven-time World Champion and has competed at the Commonwealth Games. She has held a number of non-executive roles at organisations including ukactive, the Duke of Edinburgh Award Scheme and the Laureus Sport for Good Foundation.

The application process for Foundation Trustee candidates opened this week and closes in early December 2020, with the aim of appointing new directors in the first quarter of 2021.

Commonwealth Sport Foundation Chair Christian Brodie said: “I am honoured to have been appointed as Chair for this brand-new charitable foundation, supporting the Movement’s wider vision to create peaceful, sustainable and prosperous communities across the Commonwealth through sport.

The foundation has the exciting potential to harness the power of Commonwealth Sport in order to positively impact every citizen across our 72 nations and territories. This is hugely important given the context of our shared history, our global geographic reach and our defining diversity.

We are looking for energetic, committed and capable people to take the Foundation forward to new levels of impact and engagement in the world of sport, development and peace.”

“In the lead up to the Birmingham 2022 Commonwealth Games, I am delighted to have the opportunity to undertake this role in helping to support the vision of the Commonwealth Sport Movement.

“I look forward to be being joined on the Board of Trustees by colleagues that will bring diversity of voice and required skills specialisation necessary to ensure we are truly a pan-Commonwealth Foundation that will harness the power of sport to change lives, and the power of our community to change the world.”

For more information on the Commonwealth Sport Foundation and to view the Board of Trustees Application Pack, Click here.