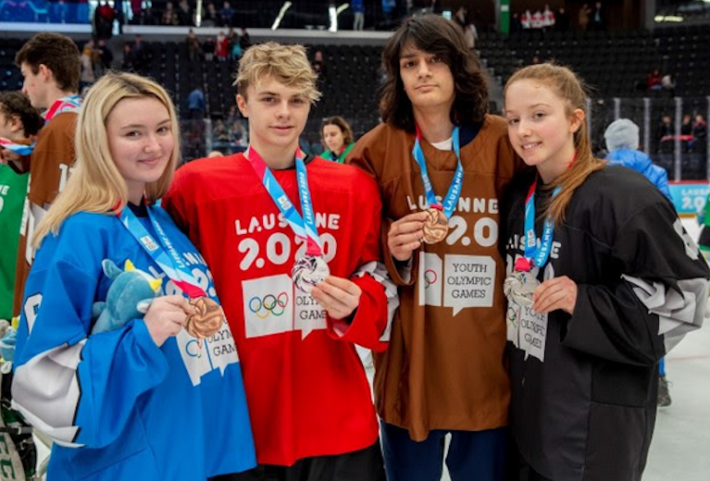 First off the ice, Mirren Foy couldn’t hide her delight at winning bronze: “It’s amazing, I was crying with happiness when the game finished. The game ended up being too close for comfort but we managed to hold on. I’ve loved getting to know and playing with these players and I’ll miss them a lot – it’s been a great experience.”

After so many dominant displays during the tournament, Nauth was relieved to have secured the bronze in a last gasp manner: “The adrenalin is absolutely pumping through me. It was a tied game and we were all expecting a shoot out. We were even picking who was going to go and then Matyas [Sapovaliv, Czech Republic] scored with an incredible finish and made my heart come out of my chest. It brought us up after yesterday and the perfect way to end an amazing week.”

After the excitement of the bronze medal matches, Team GB were back in action soon after as they had a presence in both the men’s and women’s gold medal matches with Mack Stewart (Team Red) and Amy Robery (Team Black) in action.

Despite valiant performances from both players it was easy victories for their opponents, meaning both had to settle for silver, but a great outcome all the same.

Robery was very upbeat despite the defeat: “I’m actually really happy. We did lose but we gave it a really good go and we came so far, I’m just happy to get an Olympic medal.”

Stewart was slightly more downcast but was philosophical about the outcome: “We started the game strong but we dropped behind and our heads dropped a little bit but we did try to keep fighting. It does feel great to win an Olympic medal and to share it with some great team mates.”

It was the last day of alpine skiing at Les Diablerets, with Daisi Daniels and Robert Holmes in action in the parallel mixed team event. The British pair went down 4-0 in the round of 16, against the Austrian pair of Philip Hoffmann and Amanda Salzgeber, who eventually ended up winning the bronze medal.

Only one Team GB athlete is in action on day seven of Lausanne 2020 as Theo Collins takes part in the men’s mass start competition which will bring to a close his competition and also that of Team GB’s wave one athletes.

One of the key Lausanne 2020 targets was to grow the total number of athletes from Lillehammer 2016 and to achieve this they introduced a two wave concept with athletes either competing in week one or week two. Team GB’s week two athletes start arriving across today and tomorrow, with competition starting again on Saturday 18th.