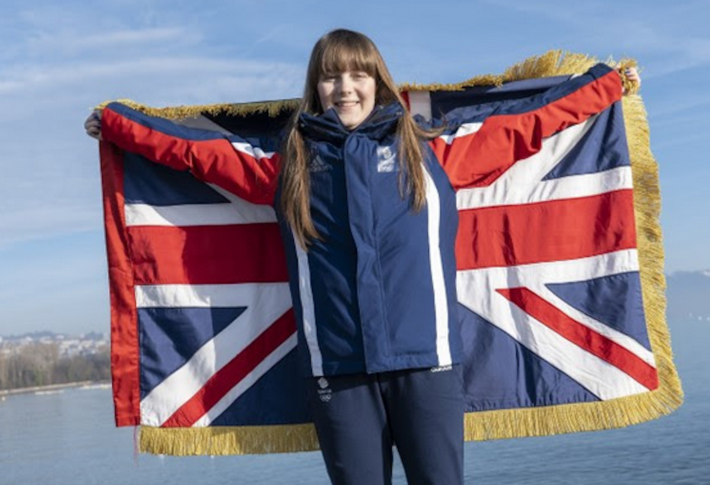 Robyn Mitchell will have the honour of leading out Team GB at the Opening Ceremony of the Lausanne 2020 Youth Olympic Games (YOG) after being announced as flagbearer.

Mitchell, who will compete in the Mixed Team curling event alongside teammates Ross Craik, Hannah Farries and Jamie Rankin, was selected by Georgina Harland, Team GB’s Chef de Mission for Lausanne 2020, after being put forward by British Curling for best displaying the Team GB values.

Tonight’s Opening Ceremony will start at 19:30 local time at the Vaudoise Aréna, Lausanne, marking the start of the Games and the first time an Olympic event has been situated at the home of the Olympic movement in Switzerland.

Mitchell will carry the Union Flag in front of the British delegation, which consists of 28 athletes aged between 14 and 17 years of age. Team GB will compete in 11 of the 16 disciplines on the programme across the 14 days of competition.

A welcome ceremony will also be taking place in St. Moritz, Switzerland – home to the second Olympic village and bobsleigh, skeleton, luge and speed skating events – with bobsleigh athlete Charlotte Longden chosen to represent Team GB at the ceremony.

The Games, which run from 9th – 22nd January, will be the third winter edition of the Youth Olympic Games, with over 1,880 athletes expected to take part.

“It’s such a surreal feeling – it’s not really sunk in yet. I’m really proud to have the chance to represent my country,” said Mitchell.

“I got told that I was going to be the flagbearer via a phone call yesterday morning – it was really exciting, especially when I got to tell my family about it.

“Preparations for the curling are going well. We think that we’ve got a good chance and hopefully we can compete for a medal. I just want to play well and do my family proud.”

Georgina Harland, Team GB’s Chef de Mission for Lausanne 2020 said: “Robyn should be extremely proud to lead the team out at tonight’s Opening Ceremony and I really hope she will enjoy the once in a lifetime experience.

“She follows in the footsteps of some great athletes, not least Lizzy Yarnold who supported the team at last month’s Athlete Summit – the first time the delegation gathered ahead of the Games.

“The team have been arriving in the Athlete Village over the past few days and have settled into the environment extremely quickly – we look forward to getting underway with the sport on Friday.”