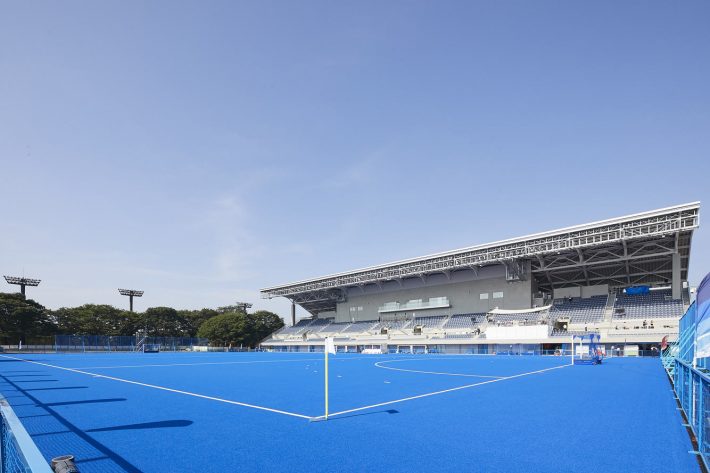 With under a year until the Tokyo 2020 Olympic Games, the newly completed Oi Hockey Stadium was officially inaugurated on 17 August.

The stadium, which is in the waterfront area of Tokyo Bay, consists of two pitches that during Games time is expected to hold up to 10,000 and 5,000 fans respectively.

The turf at the stadium is the first of its kind in the sport and is made from regrowable raw materials.

It was designed to support Tokyo’s carbon-netural targets as well as the International Hockey Federation’s commitments to sustainable hockey and is made from 60 per cent sugar cane meaning it requires 2/3 less water than previous Olympic turfs.

“We are in between running the campaign ‘Gift of Hockey’ and you already have given us a big gift of hockey right here but our gift here is sustainability, development and growing forever,” Asian Hockey Federation Chief Executive Officer and IOC Commission member Tayyab Ikham said.

After the ceremony to open the stadium, the READY STEADY TOKYO Hockey Test Event got underway with eight teams across the men’s and women’s competitions including Japan, India, Malaysia, New Zealand, Australia and China, which saw athletes play at the newly built venue for the first time.

“We pride ourselves at the Hockeyroos to try and do our part of the environment and I think as hockey as sport to be able to produce a pitch of this quality and that has less impact on the environment is something that’s going to be great for the future of the not only the world, but hockey,” Australia’s national women’s hockey co-captain Emily Chalker said.

The initiative is part of Tokyo 2020’s continued efforts to build a sustainable Games as they use technologies to minimise the impact on the environment.

This includes using self-generate energy sources at 37 of the 38 Olympic and Paralympic venues which sees the instillation of solar power generation systems, solar heat utilisation systems and both geothermal heating and cooling systems.

Meanwhile, the medals used during the Tokyo 2020 Olympic Games have been manufactured using 100 per cent of metals collected from used electronic devices.