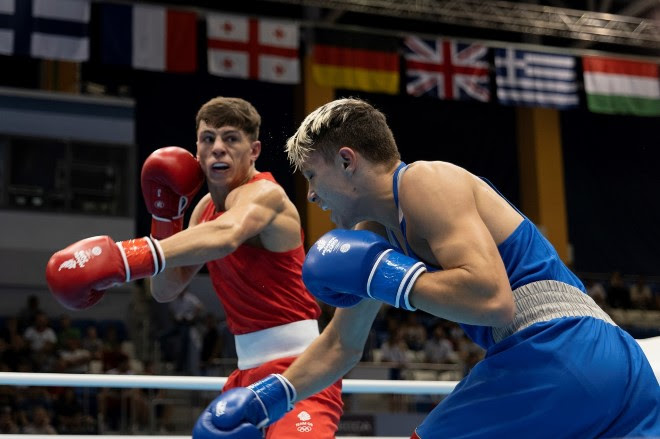 Boxing guaranteed six medals for Team GB on day six at Minsk 2019 after a scintillating afternoon and evening at the Sports Palace.

It couldn’t have got off to a better start than with three unanimous decisions for Galal Yafai (5-0), Peter McGrail (5-0) and Pat McCormack (5-0) going into the mid-session break.

Speaking after his fight against Hugo Micallef from Monaco, Pat McCormack said: “I want to be the best and to do that you’ve got to beat the best. I’m feeling good, I’ve got the bronze secured but I’m only going to be happy with gold. I got silver at the last Europeans, I’ve done that twice, so I just want the gold.”

Lauren Price finally got her campaign underway and didn’t disappoint, dispatching Irish fighter Aoife O’Rourke (5-0). Despite the wait Price was pleased with how it went: “It’s nice to get the first one out of the way, everyone’s had a box on the team and I was the last one so it’s nice to get in there, the first one’s always the hardest.

“Obviously, I’m guaranteed a medal now, so I’ll push on to Friday in the semi-final. I felt good, fitness was fine. I’ll go back now, speak to the team, go through the video and work on things for Friday.”

The only disappointment of the night came for Calum French (2-3) as he lost his light weight bout to agonisingly miss out on a semi-final. Tough fights for Luke McCormack (3-2) and Ben Whittaker (4-1) rounded off a brilliant night and sets Team GB up for an exciting Friday of semi-finals.

Tom Lusty put in a strong performance against an experienced field in the canoe sprint K1000m final. Competing in the tricky outside lane Tom finished in a time of 3.36.868 to place in eighth position.

He said afterwards: “It was pretty tough and conditions weren’t great for me in lane one. I felt I held my own for most of the race going in to the sprint finish. It’s been a really good overall experience for me looking ahead to Olympic qualifying at the World Championships and I feel like I’m on track and building up well.”

Also competing at the regatta course Zaslavi was Afton Fitzhenry in the C1 200m event. Having safely navigated her heat Fitzhenry fought a close battle right to the line in tricky wind conditions in her semi-final, finally finishing in sixth position and narrowly missing a final spot.

Team GB remain undefeated in badminton with only two matches left in the group stage. Winning all 19 of their games puts them in good stead as they progress into the next rounds over the next two days. Chris and Gabby Adcock and Lauren Smith and Marcus Ellis will play their last game of the group stage tomorrow morning.

At the shooting, the first three rounds of shotgun skeet qualification got underway with Welshman Ben Llewellin leading the way for the Brits, sitting in fourth position with a score of 73. Teammate Jeremy Bird is also well in contention, shooting 71 – just two points away from that all-important sixth qualification spot.

Elena Allen and Amber Hill currently sit 20th and 22nd respectively in the women’s competition, after both shooting 65 from their qualification rounds, while Kristian Callaghan and Sam Gowin completed the 25m rapid fire pistol event, ranking 12th and 18th apiece.

Finally, the women’s individual recurve came to a close today but Naomi Folkard (2-6) and Sarah Bettles (2-6) were unable to add to their team success as they fell at the last 16 stage