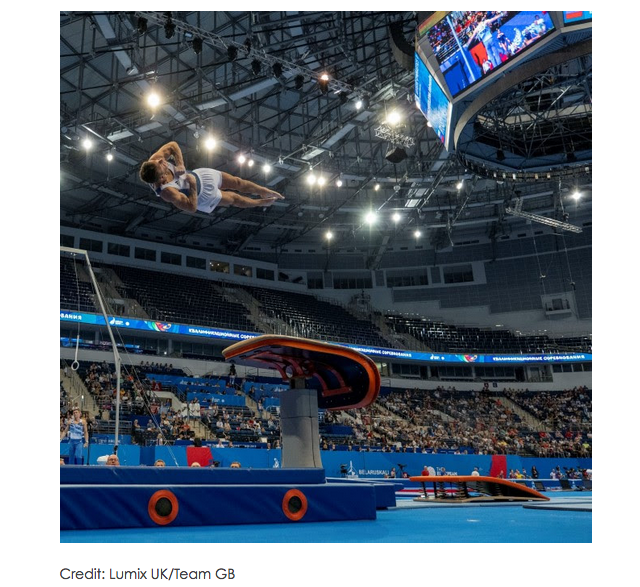 Team GB added another medal to their tally on day seven of the European Games with a bronze in the men’s team sprint.

Kenny was rested for the first stage with Joe Truman taking his place. The team won against Poland in a time of 43.456 behind both the Netherlands (42.342) and France (43.445) who went on to the gold medal race with Team GB beating the Czech Republic to bronze in a time of 43.020.

Jason Kenny, said: “I think we’ve got all of the ingredients, we’ve got a strong team. It’s just a case of putting them together and getting everyone together on the right day at the right time, going well. We’ve got the potential to certainly take it to the Dutch and give them a run for their money hopefully.”

The women’s endurance team got off to a flying start in the team pursuit finishing second in the qualifying round to head into a face-off with Poland.

The artistic gymnastics competition began at the Minsk Arena with qualifying for the all-around and apparatus finals. For Team GB, Brinn Bevan, Jake Jarman, Giarrni Regini-Moran, Becky Downie and Georgia-Mae Fenton were in action across the various apparatus in the first qualifying round of the day.

The apparatus finals will see Fenton on beam, Downie on bars (having topped qualifying), Bevan on parallel bars and Regini-Moran on both floor and vault.

Jake Jarman also put in a great display but with only one gymnast per nation allowed into the top six apparatus finals, unfortunately he couldn’t progress.

Team GB continued their winning streak in badminton with the men’s and women’s doubles progressing into the semi-finals, thus guaranteeing themselves a medal.

It was so near for Adam Ravenscroft in the men’s individual compound bronze medal match after a great early start but he couldn’t maintain it as Croatian archer Mario Vavro defeated the Brit 145-139.

Despite the disappointment of missing out on a bronze medal Ravenscroft remained upbeat: “Facing some of the best in Europe meant it was always going to be a challenge and I was a bit nervous and perhaps that showed on the finals field.

Patrick Huston was unable to add to his mixed team silver as he exited following a 6-0 defeat to eventual bronze medallist Pablo Acha Gonzalez from Spain.

In the shooting, Seonaid McIntosh finished fifth in the women’s 50m rifle three positions, with teammate Katie Gleeson ranking 28th. McIntosh, who has already won Team GB a quota place for Tokyo 2020 in this discipline, shot 1163 in tricky conditions to qualify for the afternoon final, with the Scot eventually improving on her qualification ranking to finish fifth.

There was another fifth place finish in the shooting – this time, Ben Llewellin in the men’s skeet. The Welshman navigated his way to the final through a tight field, scoring a joint top score of 122 in qualification, but a few mistakes in the final eventually led him to an early elimination.

Jeremy Bird ended up in 21st place in the men’s event, while Baku 2015 European Games champion, Amber Hill, finished 11th and Elena Allen 26th in the women’s competition. The quartet are back in action tomorrow in the mixed pairs skeet.

In the wrestling, Georgina Nelthorpe pinned Polish wrestler Daria Osocka to proceed to the quarter-finals, but unfortunately lost to Sabira Aliyeva from Azerbaijan. Reliant on other results to go her way to get through to repechage, they unfortunately didn’t and Georgina was out.

Katie Reid and Chloe Bracewell faced extremely windy conditions in lane one of their C2 500m final. The lane allocation and wind direction did not help the pair and they did well to battle through eventually placing in eighth position.

Finally, the last action of the day saw Team GB’s men’s table tennis trio of Paul Drinkhall, Liam Pitchford and Sam Walker lose in the quarter-finals of the team event to Portugal (1-3).