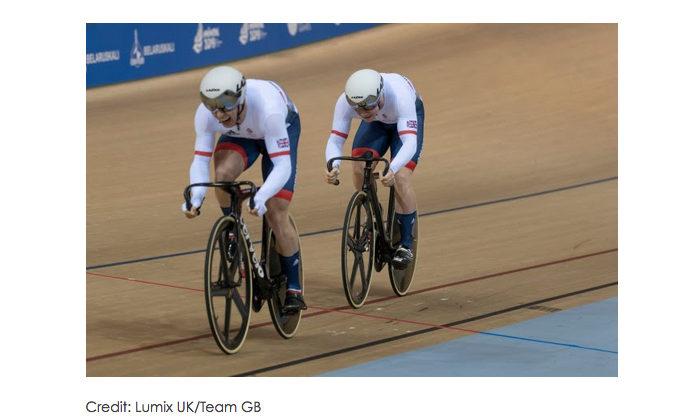 The cyclists attained the fastest spot in the first round with a time of 4.21.023 to land them a place in the final against Italy, but the Brits finished three seconds behind their Italian counterparts to take home the silver medal.

Barker said: “We’re really happy, we came here wanting a medal and were really happy to get into the gold ride-off. It was a lot closer than we thought it would’ve been. It, of course, would’ve been nice to win but we can’t be disappointed.

“We’re a very young team so for us it’s been an amazing experience and opportunity to set a good time and race at a really big event,” she added.

Jason Kenny and Jack Carlin were in action again in the individual sprint after winning bronze in the team sprint last night. Both riders qualified for the 1/8 finals and faced each other in a battle to make the quarter-finals. Carlin made it through with Kenny taking on the repechage. In a close finish Kenny was knocked out of the men’s sprint competition by Vasilijus Lendel of Lithuania.

Katy Marchant and Sophie Capewell took on the women’s keirin with Marchant placing ninth in the final and Capewell not progressing through the first round repechage.

After winning silver in the team pursuit, 19-year-old Jenny Holl raced in the women’s scratch and placed 13th.

Pat McCormack lit up the boxing arena in his semi-final fight in the men’s -69kg division, flooring his opponent in the third round to secure a place in Saturday’s gold medal bout.

Ben Whittaker (5-0) was untroubled in his -81kg semi-final bout versus Armenian Gor Nersesyan, while Lauren Price (5-0) won her fight against Russian Darima Sandakova in a unanimous decision to confirm their respective shots at European Games glory.

Galal Yafai, Peter McGrail, Luke McCormack and Cheavon Clarke all lost in fights that could very easily have gone the other way, each of them, however, still won bronze medals.

Lauren Smith and Chloe Birch produced a dominant display in their badminton women’s double semi-final against Emilie Lefel and Anne Tran of France.

The Team GB pairing took control of the match from the off with a 21-13 first set win. The French pair put up more of a battle early on in set two before Team GB began to orchestrate proceedings to again win 21-13 and take the tie. They now go on to face Cheryl Seinen and Selena Piek of Netherlands in Saturday’s final.

Chris Langridge and Marcus Ellis faced a nervy first set battle against Maas and Tebeling of Netherlands in their men’s doubles semi-finals, but came through the match winning in straight sets and make the final where they will play Danish opposition.

The pair had earlier qualified in third position, scoring 143 from their three qualification rounds, but were unable to bring their morning’s form into the latter stages, losing out in a shoot-off after both pairs were tied on a score of 32 after 40 clays.